In Pictures: Tram on a pub sign in Leven

Posted on Sunday 5 April 2020 by Gareth Prior

Pub signs around the UK often use steam locomotives as their main image but the use of trams is all together rarer (one notable exception being the Bispham Hotel up Red Bank Road which shows a Blackpool Balloon). Another pub which features a tram can be found in Leven, Fife, on the north shore of the Firth of Forth 34 miles from Edinburgh via the bridges. The Windsor is in High Street in the town and includes an image from an old postcard showing a tram in the town. Roy Calderwood recently paid a visit and provides us with more information.

The picture of the tram on the sign harks back to the Wemyss and District Tramways Company which linked Gallatown (suburb of Kirkcaldy, where the line joined Kirkcaldy Corporation Tramways) with Leven via Coaltown of Wemyss, East Wemyss, Buckhaven, Denbeath and Methil. This was a district where the Wemyss Estate landowner, Randolph Gordon Erskine Wemyss (died 1908 aged 50), developed coal mines (which had names like Michael etc after family members) and fed the mines’ output through docks he developed at Methil via his Wemyss Private Railway (the latter opened in 1901)

He built housing for the miners and opened the seven and a half mile 3 ft 6 in gauge interurban tramway on 25th August 1906, its history being well documented by A W Brotchie (in a book published in 1976). The single deck tramcars were apparently nicknamed mustard boxes in view of their shape and livery. The Leven terminus was virtually outside a church where Roy’s father became minister 22 years after the tramway closed.

The first nine cars had bodywork by Brush of Loughborough as subcontractor to the main contractors, Bruce Peebles.

The tram on the sign is pictured at Leven’s Shorehead at the foot of the High Street rather than further up the street where the pub is. Behind the wall (to the right of the tram in the picture) was the small Leven Dock, infilled circa 1910. The site is now parking and the bus station.

Bus operator SMT, on behalf of their subsidiary, W. Alexander & Sons Ltd of Falkirk, bought Wemyss and District Tramways (by now operating buses and trams) in 1930 and the tramway closed on 30th January 1932, some eight months after the Kirkcaldy system. 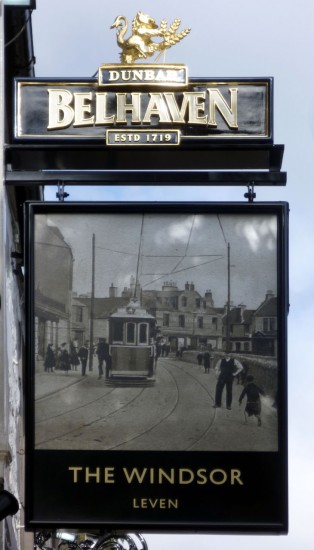 The pub sign is seen here. (Photograph by Roy Calderwood)

* Do you know of any other pub signs featuring trams? If so we would love to hear from you! Just email the details (and photos if available) to the usual address.

1 Response to In Pictures: Tram on a pub sign in Leven