Posted on Tuesday 24 September 2019 by Gareth Prior

The annual enthusiasts event at the Crich Tramway Village this year took place over two days on Saturday 21st and Sunday 22nd September to celebrate the 60th anniversary of the discovery of the site at Crich for the siting of a planned tramway museum. It was January 1959 that the first inspection of the site had taken place and now 60 years later it was time to celebrate that a home was found for a tramway museum, and a museum which has gone from strength to strength in the intervening years.

For many the most important thing of any tram event is which trams are in service? And anyone attending would not have been disappointed as 14 different passenger trams (including Berlin 223 006-4) were allocated to service on both days leading to 19 trams passenger trams running across the whole weekend. Usually at these events it is a case of checking to see whether the tram you want is in service AM or PM but with a two day event there were no such worries with all trams scheduled to run that day doing so all day (except for lunch breaks for the crew or in a few cases a little bit of attention required in the workshop). The undoubted highlight of the operational trams was the first use of Blackpool & Fleetwood Box 40 at Crich since 2014 with the tram having seen spells of operation in Blackpool and Beamish in the intervening period. Box 40 was due to run throughout both days but although it successfully ran on the Saturday a fault was suffered during the evening which meant it started Sunday in the workshop. The fault was fixed and after a couple of test runs the Box car was back in action for Sunday afternoon.

With the weather very much being a weekend of two halves (warm and sunny on the Saturday, wet – but not as wet as suggested in some forecasts in the lead up – on the Sunday) the allocation of other trams to join Box 40 saw most open toppers confined to day one (except for London County Council 106 which ventured out on both days although its top deck was far more popular on the Saturday!). On the Saturday Glasgow 22, Sheffield cars 74 and 510, Blackpool cars 166, 167, 236 and 762, Oporto 273, MET 331, Leeds 399 and Liverpool 869 completed the passenger service whilst Sunday saw Chesterfield 7, Glasgow 22, LCC 106, Oporto 273, MET 331, Liverpool 869, Blackpool trams Standard 40, 630 and 762 and Leeds trams 180, 345 and 399 out and running. As is customary at these events trams often ran in twos and threes up the line with at one stage a pre-planned seven trams all sent to Glory Mine at the same time to see just how many trams you could fit in the new layout. Also of note was that Leeds 399 ran with a special commemorative wreath on one end to celebrate the anniversary in style.

Whilst still on the subject on operating vehicles works cars Cardiff 131 and Croydon Tramlink 058 were out on the mainline offering demonstration runs; the Cardiff water car, the first tram to arrive on site after all so a major component of the celebrations, was out throughout the weekend whilst the ex-Croydon diesel vehicle was running during Saturday afternoon and briefly late on Sunday with some very happy volunteers from another heritage tramway! And the newest member of the collection also played a major role with the Barnsley bus no. 5 operating short trips for visitors around the car park (morning and afternoon on the Saturday and morning only on the Sunday because of the wet weather).

Of course, these events and not just about the trams in service but also the line-ups around the depot fan which have become synonymous with Crich enthusiast events and this year didn’t fail to disappoint with different line-ups on each day, both featuring trams from Yorkshire. As well as being 60 years since the founding of the Crich site, 2019 also marks the same number of years since the tramway in Leeds closed so on the Saturday the main depot fan line-up included trams from that very system.

With the three operational Leeds cars included (180, 345 and 399) they were joined by the Leeds Tower Wagon 2 along with Leeds horse car 107. Five trams does seem to be the optimum maximum number of trams for a line-up such as this on the depot fan from a photographic point of view and these five certainly made for a colourful sight in the sun of Saturday afternoon with Leeds liveries of many colours!

The Sunday saw the subject of the line-up move south a bit to Sheffield (just 59 years since that system closed) and again five trams were included and again there were three operational cars included, electric double deckers 74 and 510 plus horse car 15. They were joined by Sheffield 189 and Sheffield Works Car 330. Whereas the sun was an issue for the Leeds line-up there were no such problems for this as almost as soon as the line-up was put into place it started to rain again, but despite that it still made for a fine sight again showing the fine collection of Sheffield trams in the collection (even with some unable to be included).

Although these were the two main line-ups that wasn’t all as Gateshead 5 also put in an appearance on both days as part of a BET line-up along with the Barnsley bus. Both of these vehicles were owned by BET in their operational lives with the bus, newly added to the Crich collection and officially handed over during this event, introduced as the start of replacing trams across the country. It has now been 12 years since 5 last ran in service at Crich and for those visiting it was good to see it out in the open once again.

Other highlights of the weekend including London County Council 1 (Bluebird) being dragged out of the workshop so that you could see latest progress on its restoration with its distinctive blue painting gleaming in the Saturday sunshine. Before things got underway on each day there were also photo line-ups on the museum street which included Cardiff 131, Leeds 399, Blackpool 166, Glasgow 22 and the Barnsley bus on the Saturday (unfortunately public transport on a Sunday meant I couldn’t get there to see what was stabled on the Sunday!)

An actioned packed two days came to a close on Sunday evening shortly after 1700 with the final passengers trip of the day involving three trams – the three operational electric trams from Leeds which commemorated the end of services in Leeds 60 years previously (399 had also been the first passenger tram arrive at Crich on 15th August, second only to Cardiff 131 in arriving on site). 180 brought up the rear showing off its destination as Crossgates – the very last tram route to run in the West Yorkshire city.

And that was the end of another excellent enthusiast event at Crich, with healthy visitor numbers over the weekend (no surprise that Saturday was the more popular considering the weather which does just go to prove how much difference decent weather does make to visitor numbers of heritage tramways in the country). It does always make you think – what will they think of next?!

* A complete photographic review of the event will follow in a future update of British Trams Online. I had hoped this would be online this week but time is against me as it is very nearly time for Blackpool’s big event so it will be early October at the earliest now.

Stars of the event 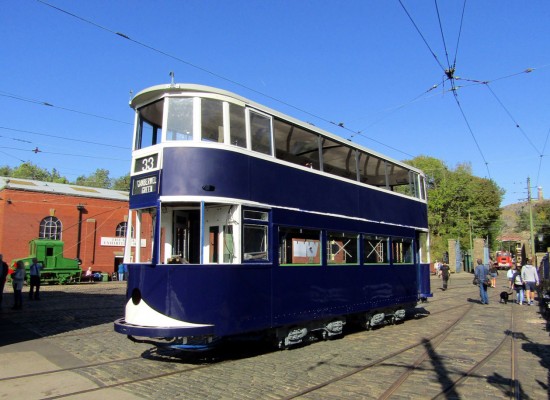 An added bonus on the Saturday was the dragging out of Bluebird in front of the workshop. 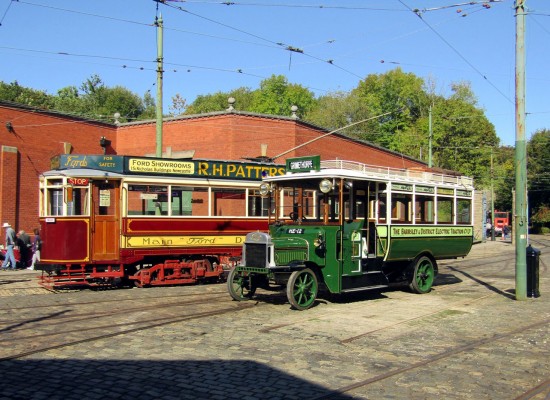 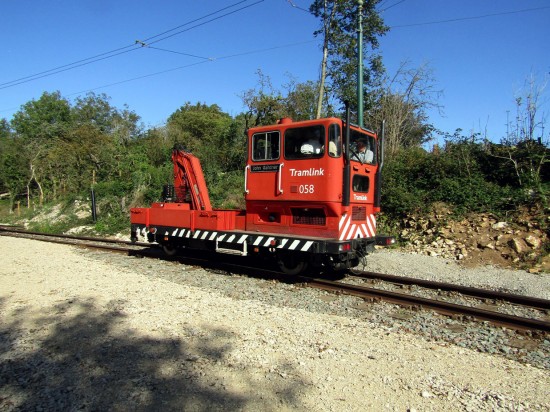 Works cars were also in operation, including Croydon Tramlink 058 seen here at Glory Mine. 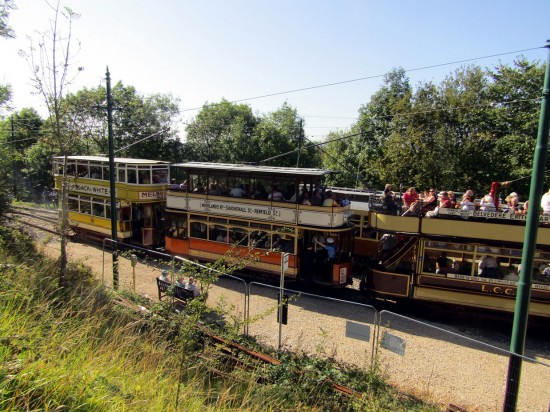 A busy scene at Glory Mine with Glasgow 22, London County Council 106 and Leeds 399 in prime position. 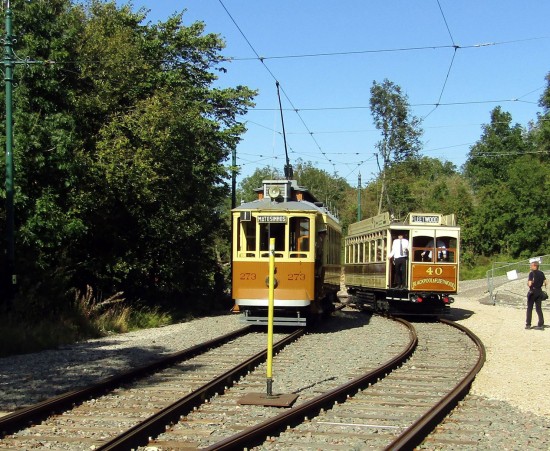 First day back in service at Crich for Blackpool & Fleetwood Box 40, seen here at Glory Mine with Oporto 273 for company. 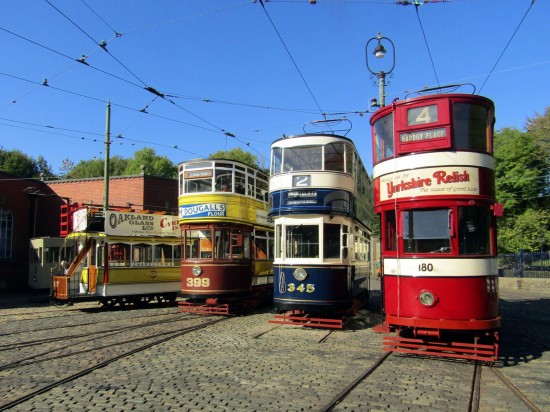 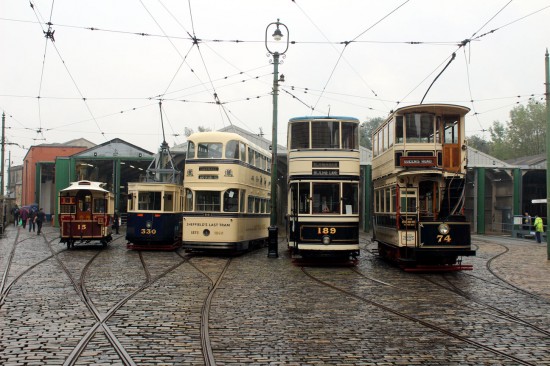 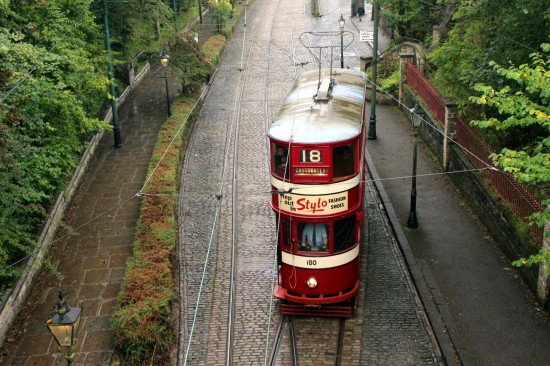 In the fading, gloomy light at the end of the day Leeds 180 heads up the line with the final service of the day complete with Crossgates set as the destination. (Photographs x2 by Gareth Prior, 22nd September 2019)