It has long been a tradition in Blackpool that the various attractions in the town advertise on the trams but since the introduction of the new modern trams the only full advert liveries have been for a shopping centre (twice!), a fashion website (x2!) and a sports shop (very, very briefly!) – until now that is! First built Flexity2 001 has received a full vinyl wrap – yes, it does include window contravision – for the various Merlin run attractions along the Golden Mile with the tram debuting with this look on Monday 26th August.

The vinyls advertise a number of Merlin attractions – many of which are no stranger to Blackpool trams. Each side is different with one side advertising The Sealife Centre and the Blackpool Tower Circus (complete with Mooky the clown) whilst the other side has the Incredible Hulk advertising Madame Tussauds, the Blackpool Dungeon and Bar 380. The central section of both sides features an advert for the Blackpool Big Ticket.

As well as the advertising vinyls the tram has also received oversized white numbers in the same position as numbers on other trams although you will be hard pressed to see these numbers on the Bar 380 advert which has a light background.

The advert is sure to prove controversial considering the extensive use of contravision on the windows – the windows on sections two and four are devoid of vinyls but not on sections one, three and five – but it does add some extra interest to the trams just as the illuminations come and we are sure the Incredible Hulk in particular will be very popular with children!

The choice of 001 for this advert is interesting as this tram was often used on driver training and presumably will now be more likely seen on the service throughout the illuminations. Whilst the tram hasn’t previously carried an all over advert it did carry above window ads for The Sands Venue (now closed).

There are now currently three trams with full adverts in Blackpool with 003 and 016 in identical designs for Pretty Little Thing.com. Previous adverts since the opening of the upgraded tramways were Fleetwood Freeport on 016 (two different designs) and a very brief advert for JD Sports on 014. 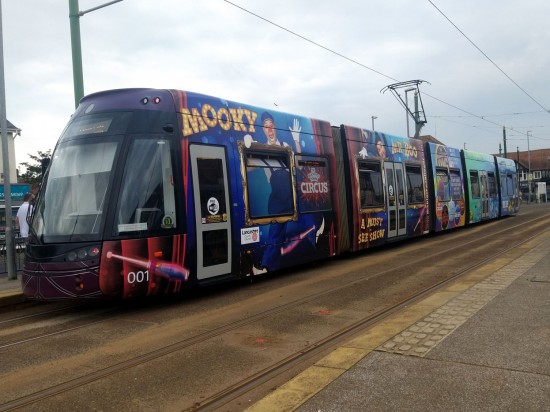 This is the side of the tram which advertises Blackpool Tower Circus and the Sealife Centre with this view at Cleveleys showing the Circus advert. 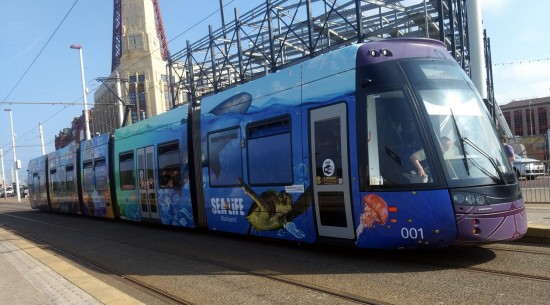 Same side of the tram but this time we see the Sealife Centre part of the advert with the tram at Tower. (Photographs x2 by Mark Cufflin) 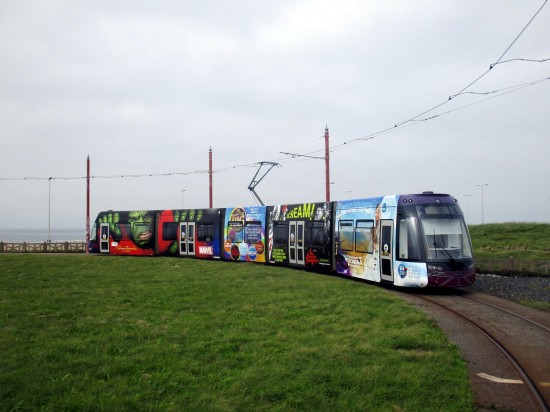 The other side of the tram is seen here on Little Bispham loop. Closest to the camera are adverts for Bar 360 and the Blackpool Dungeon with the Incredible Hulk and Madame Tussauds at the far end. (Photograph by Rob Bray)