Posted on Saturday 27 July 2019 by Gareth Prior

The year is 2014 and the system is Midland Metro as we take a look at special liveried 11 in action.

Having been delivered to the West Midlands from Italy on 6th October 1998 11 was just “one of the 16” until it was named Theresa Stewart in 2003, becoming the second of the T69s to be receive a name. But more exciting changes were to come when in 2013 it was chosen to receive a special commemorative livery of Birmingham Corporation Tramways Blue and Cream. 2013 marked the 60th anniversary of the closure of the original tramway system in the second city and this was a good way to commemorate this event and the new livery included fleet liveries the original font carried by trams in Birmingham. The end for 11 came in December 2014 when it was formally withdrawn from service and a move to Long Marston followed but unlike other members of the class the future is bright for the tram as it has been saved for preservation and eventual display at Birmingham Museums.

In this view taken on 25th June 2014 we see 11 at Wednesbury Great Western Street with a service from Wolverhampton to Birmingham. 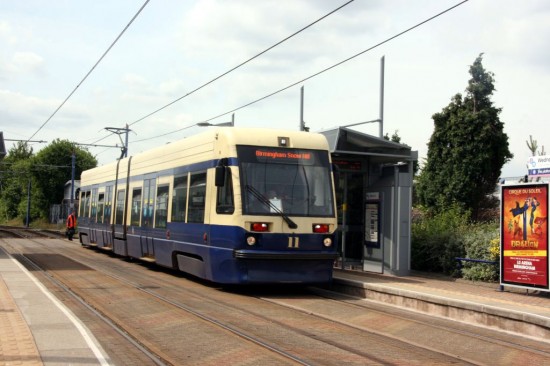