We feature a tram in today’s Blackpool edition of Picture in Time in a much remembered condition – the wartime Green and Cream liveried Balloon 700.

Balloon 700 started off life as an Open Top Luxury Dreadnought numbered as 237 (226 to start with). The first of the streamlined double deckers to enter service in February 1934 wartime led to the decision to fully enclose all the open toppers with 237 succumbing in the June of 1942. Although the prototype of the class 700 (as renumbered in 1968) was just another of the Balloon Cars until it came to its time for a major overhaul. In reverence to its historic nature it was decided to treat it to a more traditional overhaul than the previous tram to go through the workshops – 723 – which led to several original features including roof windows, central destination indicators (albeit ones with just one destination!) and end double indicators. To top it all off it received a repaint in the always popular Wartime Green and Cream livery. To some it was a surprise when 700 was chosen to receive the widened centre entrances to become a member of the B fleet for intended use on the upgraded network, including an eventual repaint into Flexity Purple and White. Despite this work 700 has seen very limited use as a B fleet car and is more likely to be seen loaned to the Heritage fleet.

In this photo we see 700 some 10 years after overhaul in 2007 at Fisherman’s Walk, Fleetwood terminating before heading back to North Pier. 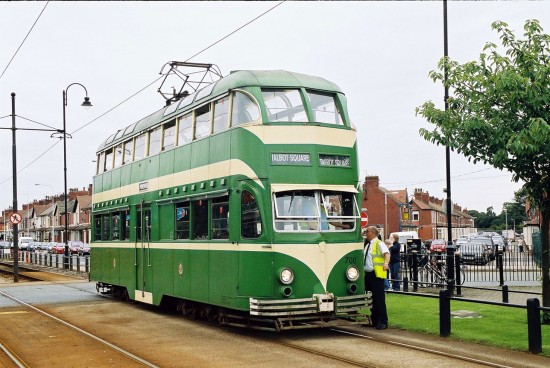