Posted on Tuesday 2 July 2019 by Gareth Prior

Another black and white for our latest dip into the Blackpool tram archives this week.

We are again in either late 1968 or 1969 for this image at Rigby Road Depot. Obviously in those days there were no security fences and it was perfectly acceptable for enthusiasts and general members of the public to wander in to the depot surrounds and see what was going on. This truly fascinating image shows a large number of trams at rest with Coronation 650 closest to the camera blinded for Starr Gate. The remainder of the trams are unidentified with Railcoaches, a Boat Car and a couple of Balloon Cars all visible and although the Balloons do have in between deck adverts its green and cream as far as the eye can see! 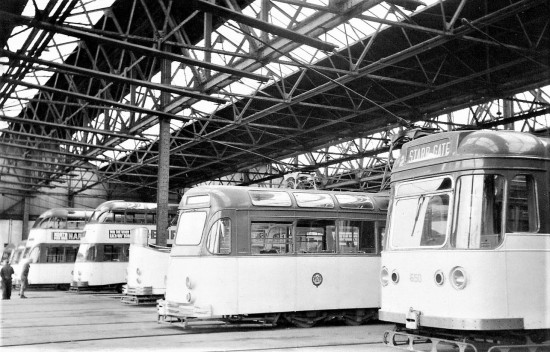