A baker’s dozen of trams but where are the passengers?

The latest Bank Holiday weekend in Blackpool once again saw the more intensive Gold timetable running with six trams allocated to service each day across the tramway between Pleasure Beach and Blackpool. The original allocations were changed throughout the weekend with both the weather and tram faults causing these amendments but in total 13 different trams ran in service. However, despite the number of different trams out and about it was a very quiet weekend with the trams running half empty (at best) for most of the time.

The weekend actually got going on Friday 24th May with the Green timetable using four trams between Pleasure Beach and Little Bispham. The trams out were Boat Cars 227 and 600, Standard 147 and Centenary 648. A slight delay was seen at the end of the day when 147 was 20 minutes late back at Pleasure Beach ahead of operating its last journey to Cabin. In the end it arrived on the loop behind 648 when it should have been in front of it and by quite some time. The evening then saw two further heritage trams out with Balloon 717 running on the Great British Night Out and then Balloon 715 was used on The Ghost Tram – the first time it had been used since receiving the 1970s Green and Cream livery complete with period adverts.

The main weekend events then got going on Saturday 25th May and from the start of this day it was allocation changes, a theme which would continue throughout the weekend. Both Boat 227 and Brush 631 were unable to leave depot and were replaced in service by Balloons 701 and 717. The fault on 227 was repaired by late morning and it was able to enter service replacing 717. The other trams in service on this day were Boat 600, Railcoach 680, Balloon 715 and Balloon 723. The afternoon saw the very first “The Transport Tour” which allowed participants to travel to Fleetwood by tram or heritage bus and then return on the other vehicle. Standard 147 was allocated to this special, this tram had also been out in the morning taking a Wedding Party to and from The Wedding Chapel.

Sunday 26th May was the day of changeovers with half of the trams having to be swapped down part way through the day. The weather had already put paid to the use of the Boat Cars from the start of the day which meant the day started with Standard 147, Brush 621, Centenary 648, Railcoach 680, Balloon 715 and Balloon 719 in service. 680 was the first to fall by the wayside with Balloon 723 replacing this before Balloon 715 and Balloon 719 also both had to return to depot (for 719 it suffered a transponder fault which saw its trip to Fleetwood curtailed at Little Bispham) with fellow Balloon Cars 717 and 701 respectively coming into service.717 had also been out in the morning on a Private Hire which ran to both Starr Gate and Fleetwood.

And so onto the third and final day – Sunday 27th May – and again it wasn’t possible to run the Boat Cars because of the weather (dry but windy) so Balloon Cars 717 and 723 substituted throughout the day. The other four trams were Standard 147, Brush 621, Balloon 700 and Balloon 701. Another changeover occurred during the day when 147 suffered a recurring inverter fault on its way back to Pleasure Beach from Fleetwood (coming to a halt at Rossall Beach, just short of Cleveleys and Gynn Square). This saw Balloon 718 in use during the afternoon – its first use of the weekend bringing the number of heritage trams in use up to 13 (plus 711 as the Shop Tram which did run its unadvertised trip from North Pier to Little Bispham on this day).

Although your writer had an enjoyable weekend the very noticeable thing was the very low passenger numbers experienced on all three days. On some journeys it almost felt as if you could have hired your own tram and not allowed anyone else on board, it was that quiet. When there are even journeys on the ever popular Boat Cars where the crew outnumber the passengers on board you can tell just how few people there are wanting to ride on the service.

Whereas a few years ago it seemed the rare chance of riding a heritage tram – any heritage tram – to Fleetwood was enough to attract plenty of enthusiasts to attend these Gold events it seems that this is no longer the case. It is true that there is currently a more limited variety of trams available for service (we have lost both Twin Cars, Princess Alice, Box 40 plus loan trams such as Marton 31 and Pantograph 167) – indeed of the 13 trams which ran this weekend seven were Balloon Cars – and this may have had an impact on visitor numbers. Coupled with the rather indifferent weather (it would probably be fair to say that Blackpool as a whole was pretty quiet as well) and the fact that this was the third Gold weekend in around six weeks because of the close proximity of Bank Holidays in this period it would appear that even the Blackpool Tramway needs that “wow” factor to get even the most dedicated of enthusiasts to visit. None of this is written as a criticism of the Blackpool Heritage Tram Tours team but is a genuine concern of the future of these more intensive weekends of operation.

The next Gold weekend will be for the Totally Models event on 22nd and 23rd June which does have the addition of the model exhibition at Rigby Road which should see higher visitor numbers once again. 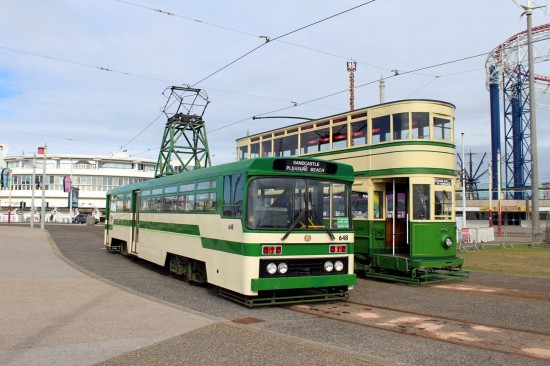 Friday 24th May and Centenary 648 and Standard 147 meet unexpectedly at Pleasure Beach. 147 was running 20 minutes late at this point. 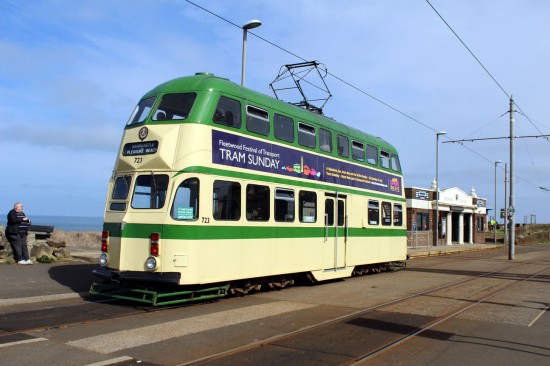 Balloon 723 on 25th May at Bispham with the sun shining. 723 ran on all three days of the weekend. 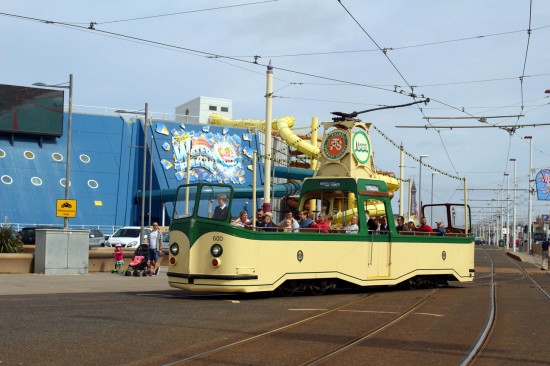 It wasn’t completely empty trams all weekend as seen in this view of Boat 600 arriving at Pleasure Beach. 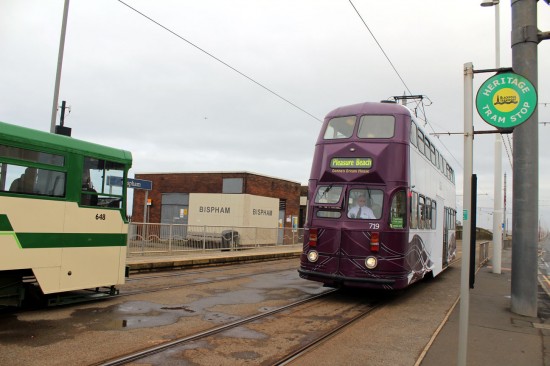 Before having to return to depot on 26th May Balloon 719 arrives at Bispham where Centenary 648 is waiting. 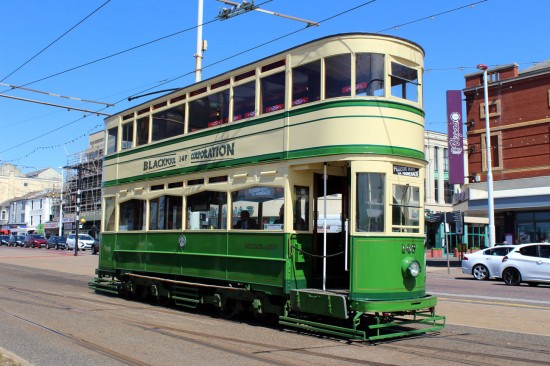 Standard 147 stands at North Pier/Tower when working a service to Pleasure Beach. 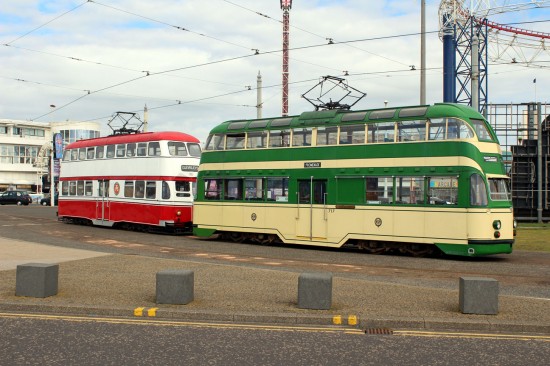 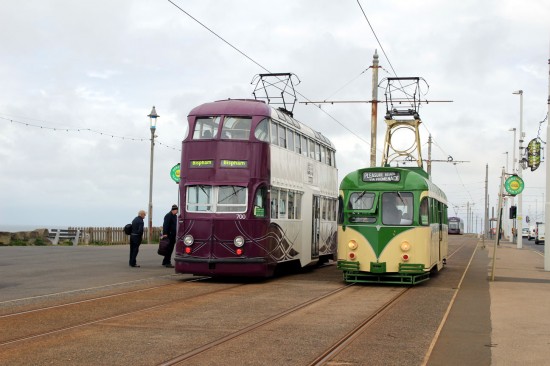 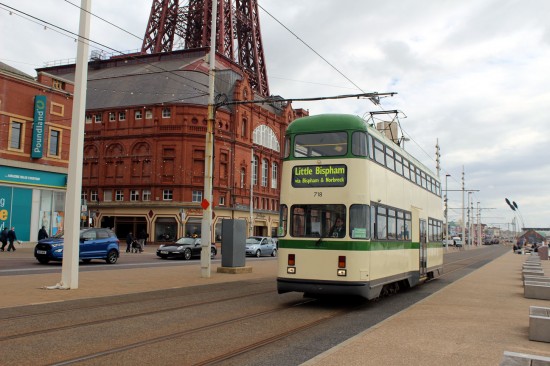 The 13th tram of the weekend, Balloon 718, approaches North Pier/Tower having replaced Standard 147 in service. (All Photographs by Gareth Prior)

2 Responses to A baker’s dozen of trams but where are the passengers?