A tradition on many piers in the UK was the provision of a tramway or railway and whilst the vast majority have now been removed one which still very much remains – probably party because of the length of the pier! – is that on Southend Pier and that is where we head for this week’s Picture in Time image.

The railway on Southend Pier first opened in 1890 as a 3’6” gauge line but by the time of this image it had been rebuilt – after an eight year closure – with a 3’ gauge line. This reopening occurred in 1986 and at that time two new diesel trains were introduced and it is one of those which we see in this image. Carrying a simple red and white livery from delivery (although now in a blue based livery) both trains have remained in service for over 30 years now but recently plans were unveiled for their replacement.

This image was taken on 30th June 1986 and shows one of the trains heading away from the town end of the Pier. 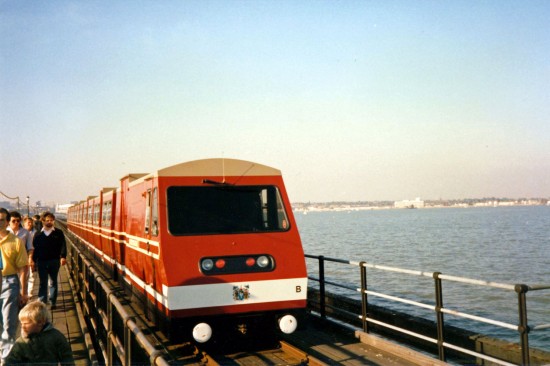