Tram to return to Chesterfield – for one day only?

The Tramway Museum Society have revealed that a request has been received from Chesterfield Borough Council, to borrow Chesterfield 8 for display in the town. If agreed, this would see the horse-drawn tram become one of the main attractions at the Chesterfield Arts festival, which takes place on 4th May 2013.

Short-term tram loans have become more commonplace in the last few years, but if Chesterfield 8‘s homecoming becomes a reality, then this could well to prove to be the briefest loan period of any preserved tram to date, as it is intended that the tram would be displayed in its home town for just one day! Indeed, the car would not even be away from Crich for a full 24 hours, as it has already been emphasised that it would not remain there overnight. The event organisers have asked for the tram to be displayed prominently in Rykneld Square between approximately 9:00am and 5:00pm on 4th May; presumably it would then be returned to Crich. It is not clear whether it would be kept on a low loader, as was the case with the last TMS tram loan (that of Grimsby & Immingham 14 which was displayed at Immingham Docks in July 2012), but due to its small size the task of unloading 8 should be a simple one which will hopefully increase the chance of it being displayed more effectively. Indeed, in the past, short-term loans of trams for exhibitions have been biased towards horse cars, presumably as they are easier to transport than their electric cousins. Sheffield 15‘s visit to the Kelham Island Industrial Museum in 1995, and Manchester L53‘s time at the Manchester Museum of Science & Industry in 2009 being two examples of such loans.

One slight complication concerns the ownership of the horse tram. Although usually considered part of the national collection, 8 is actually owned by the Science Museum who have placed it on long-term loan to the TMS since it was restored in the 1980s. After several years of occasional use, it last ran in 1993 and is usually confined to the Great Exhibtion Hall apart from occasional forays outside for special events. Hopefully the Science Museum and the Tramway Museum Society will work together with Chesterfield Borough Council, to allow 8 to return home for this event, allowing it a brief spell in the limelight once again this year. 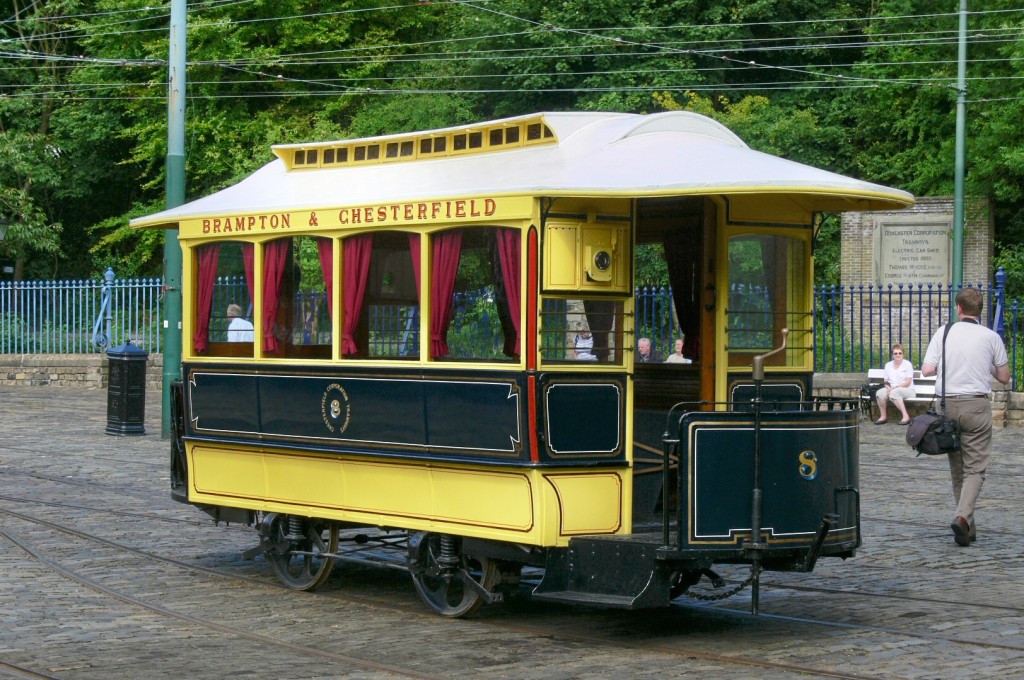 One of Chesterfiled 8's last high-profile outings was in 2009, when it was brought outside for a horse car lineup on the depot fan at Crich. Here it is seen alone, showing its attractive dark blue and primrose livery to full effect. (Photo by Tony Waddington)