Fleetwood Heritage Leisure Trust – a look back at 2012

The Fleetwood Heritage Leisure Trust was a new name in the tramway preservation movement for 2012. Previously operating as the Friends of Fleetwood Trams, this group recently formed with the main aim of preserving a selection of traditional Blackpool trams for future display in a new visitor attraction at Fleetwood, which would be the first step of a scheme to regenerate the town. The key development would be a new tram museum at the town’s former Copse Road tram depot.

Although the Trust has not made much visible progress during 2012, a lot has gone on behind the scenes and a lease on the Copse Road site has been agreed on. This building is currently used as a car sales outlet, and despite hopes that trams would start being moved in this year, this sadly failed to materialise. However, the Trust remain optimistic that their dream will become a reality sooner rather than later, and hopefully more visible progress will be achieved during 2013. The FHLT are already persuing various funding options which will hopefully assist with their goals.

Like many other preservation groups, the FHLT has found itself with a large number of trams in outside storage for most of the year. After the collection was moved out of Rigby Road depot, most of them were spread across two sites. Four of their trams joined Balloon 710 (which had been the first to move in July 2011) at an industrial estate on the outskirts of Fleetwood; these being Ex-Towing car 678, Trailer 683, Balloon 726 and Jubilee car 761. A further three trams are stored at Kirkham Prison; Brush Railcoach 621, Centenary car 641, and Towing car 673. All but 621 are currently stored outside, although thanks to local firm West Coat Builders Supplies, most have been covered over to protect them from the elements. The prison inmates have been joined by the top deck of an old Edinburgh tram during the course of the year, which has become the latest addition to the collection. It is planned to carry out some cosmetic work on this body shell so that it can be used as an admissions kiosk/shop at the Copse Road museum in the future.

One tram which had a very difficult year in 2012 was Centenary car 646. This car was acquired for the Trust by its long-running advertiser, Paul Gaunt, and deposited in their warehouse car park. Unfortunately this was a very exposed position, as was proved when it suffered two vandal attacks during October. A decision was subsequently made to sell off the car which later disapeared – although rumoured to have gone to Preston, its current whereabouts or the plans for its future have never been confirmed in the public domain, making this one of the stranger tram developments of the year. Whilst the potential loss of 646 is sad, at least the FHLT still have the pioneer Centenary car 641 in their care, and it is to be hoped that this tram will ultimately be restored to near-original condition.

To end on a much more positive note, the most exciting development of 2012 for the organisation was undoubtedly the transformation of Brush Railcoach 627, now known by its original fleet number of 290 once again. This tram received a full repaint into a special gold and white livery to commemorate the Queen’s Diamond Jubilee, and was decorated with illuminations, including paintings in the saloon windows designed by local schoolchildren. This project was carried out at Kirkham Prison by inmates with support from FHLT volunteers and Blackpool’s Illuminations Department, with the completed tram being placed on display on a special siding in the middle of the Pleasure Beach tram loop throughout the illuminations season. Although not everyone approved of 290’s garish makeover, the tram certainly looked very striking and generated many favourable comments, becoming one of the star attractions during the illuminations season. At the time of writing 290 is still at Pleasure Beach whilst plans are formulated for its future, which are likely to see it return to the prison whilst the Copse Road site is prepared for its new role. Hopefully 290 will be able to move there, along with some of the Trust’s other trams, in 2013 – but that will only happen if the group can attract considerable extra support to assist with its ambitious plans. 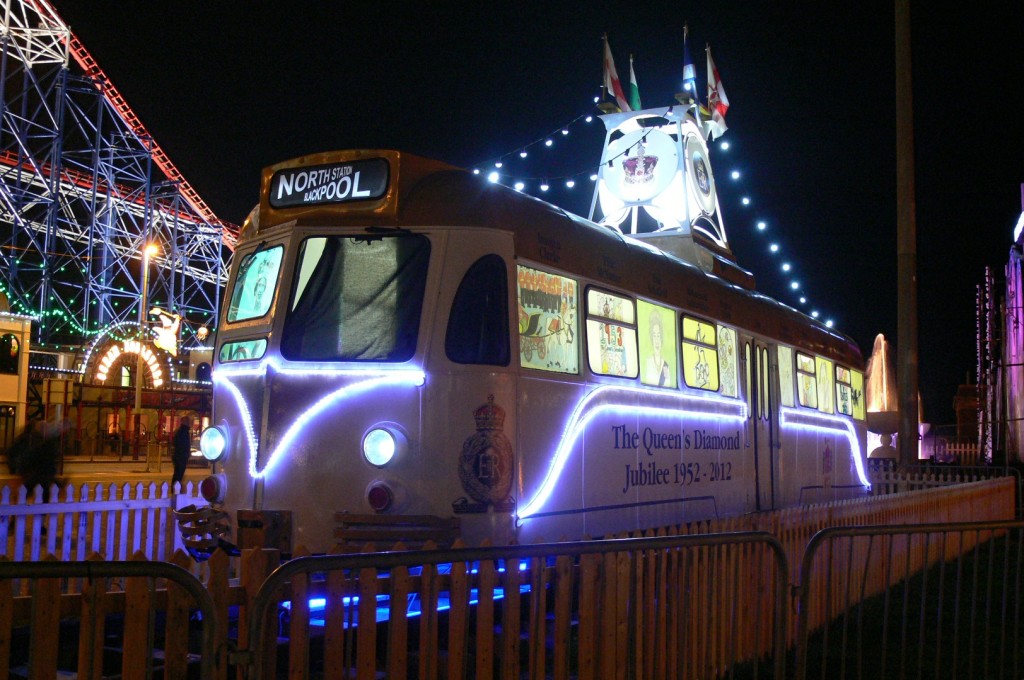