Posted on Tuesday 2 April 2019 by Gareth Prior

Whilst work on the Blackpool North Railway Station extension is slowing down with the high-profile Wilkinson’s store still being in the way of the completion of the line and construction of the terminus (as well as the overhead actually being strung) there is still some progress to report, particularly in Talbot Square itself where the single platform – minus any furniture such as shelters – has now been completed. Mind you, you could be mistaken for thinking it was just a part of the pavement! Peter Dockerty with the photo. 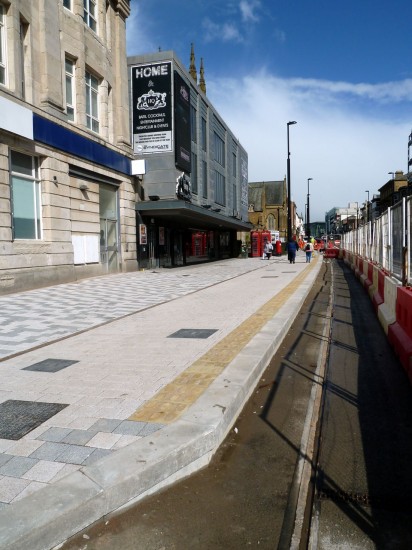 The newest stop on the Blackpool Tramway! But with the delays to the project it will be some time before a tram calls here on its way up Talbot Road to the railway station. (Photograph by Peter Dockerty, 2nd April 2019)

2 Responses to In Pictures: New platform at Talbot Square