The 1913 Leyland “Combination Car” motorbus which operated in Barnsley will now become part of the Crich Tramway Village collection after the conclusion of a successful fundraising campaign. The bus is of a key historic significance and shows the bridge between trams and buses which many towns and cities across the UK experienced in the early part of the twentieth century.

The bus – numbered 5 – was part of Mike Sutcliffe’s collection and he kindly offered it for sale to Crich at less than half the market value as he wanted it to have a permanent home at the museum. The museum needed to find £65,000 for the acquisition and this has now been raised thanks in no small part to a £45,000 grant from The H. B. Allen Charitable Trust, which is now winding up and won’t be offering any further funding. The remainder of the funds have been raised through generous donations from both members of the TMS and the general public.

There can be no doubt that the acquisition of this bus – regardless of its connection to UK tramway history – will divide opinion amongst enthusiasts with some likely to bemoan the fact that the funding used to purchase the bus could have been better used on a tram plus the space it will take up could also have seen another tram put on display. However, the bus was one of five single deck buses purchased by Barnsley & District Electric Traction Company Ltd to test the operation of petrol motor buses as an alternative to electric trams. It is also the oldest British full-size single decker bus in existence (and possibly the oldest in the world) and is also the oldest preserved bus of those operated by British Electric Traction Group.

Speaking about the acquisition, Laura Waters, Crich Tramway Village Curator, said: “We are delighted that the bus will now be able to remain at the Museum as a permanent part of our collection. We are extremely grateful for the kind generosity and support from the H.B. Allen Charitable Trust, Tramway Museum Society Members, our visitors and all others who have supported the project and allowed us to be able to make this valuable purchase to enhance our collection.” 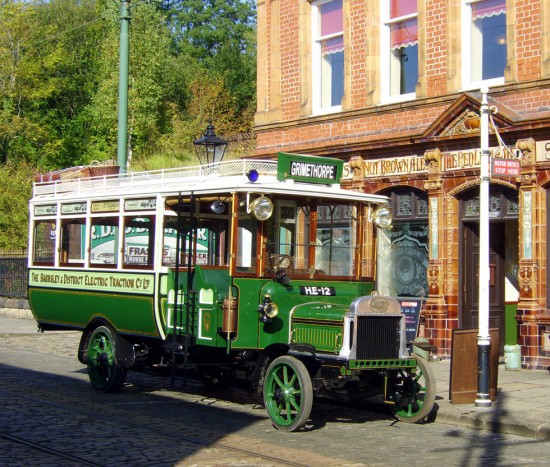 No. 5 – the latest acquisition at Crich – stands in the sunshine outside The Red Lion. (Photograph courtesy of Crich Tramway Village)