Posted on Sunday 25 November 2012 by Gareth Prior

The line extends from Piccadilly Station through to Droylsden via the Etihad Stadium and Velopark and is still slated on the Metrolink website to open before this year is out although no official confirmation of an opening date has yet to be given by TfGM.

In winter 2013/4 the line is due to be further extended through to Ashton-under-Lyne and in recent weeks the overhead line has now been fully installed on this section. Section insulators have been put in at the limit of the Phase 3a section but these are in a temporary format with no side runners to ensure no overrunning tram pantograph can accidentally energise the Ashton section. 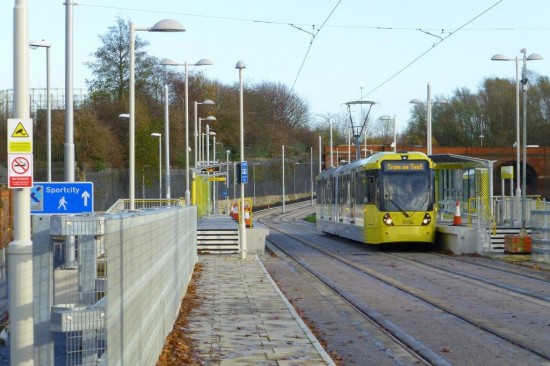 M5000 3056 is seen here at Holt Town whilst being used on testing/driver training on the East Manchester Line on 23rd November 2012. The tram is heading for Sheffield Street - just short of Piccadilly - during a day of testing. (Photo: Steve Hyde)

* A full Photo Gallery on the East Manchester Line tram testing and a look at the
line between Droylsden and Ashton-under-Lyne can be seen at http://www.britishtramsonline.co.uk/gallery334.html

5 Responses to In Pictures: Metrolink testing resumes to Droylsden