Posted on Monday 19 November 2012 by Gareth Prior

Back in August we featured some photos of Cambridge Horse Car 7 which is the next tram restoration project being undertaken at the Ipswich Transport Museum following the completion of Ipswich 33. At the time initial rubbing down of the tram body had confirmed that it was indeed car 7 but not a great deal more was known but in the intervening three months the team working on the tram have discovered a fair amount more – including the fact that before operating in Cambridge the tram was used in Bradford!

As far as was known initially the tram was purchased by Cambridge in 1894 but there was some confusion over its origins as G F Milnes had taken over The Starbuck Company eight years before 7 was delivered but continued to construct trams to the Starbuck pattern for a
few years, however 7 carries a Starbuck Co. builders plate not a Milnes one. The tram is a typical example of an 1880s style lightweight enclosed 18 seat single-deck tramcar with monitor roof and seven side windows, 21’ 8” long by 6’ 1” wide and was converted to an 1890s style open-top double decker. The team undergoing the work on the tram initially thought that the likelihood was that it had already been completed as a single-decker by Starbuck before the take-over and had been unsold and was then converted by Milnes to fulfil the order from Cambridge. But as more rubbing down was undertaken it was discovered this was not the case.

The first key discovery was that there was a fourth livery layer under the three Cambridge ones. This consisted of a blue and cream colour scheme with the cream areas being outlined in blue. Fragments of a company/municipal crest on both sides of the panel beneath the windows was also discovered and the words “No. 3 car” were found on an interior panel and the remains of seating capacity lettering for a single deck car were also discovered. But the most important discovery at this time was the name of a General  Manager on the lower ends of both sides of the body – “John Waugh Gen. Manager”.

Following research it was discovered that John Waugh was C.E & Manager at the Bradford and Shelf Tramway Company and the possibility that the tram thought to be just  Cambridge 7 had originally come from Bradford was confirmed when after further rubbing down a Bradford crest was discovered right in the middle of the Cambridge Street Tramways garter! Add to that evidence that the tram was originally built for operation on a four foot gauge tramway and it would appear that Cambridge 7 was acquired from  Bradford.

It just goes to show that in tram restoration you never quite know what you are going to find and that as you literally rub down the layers there may be a surprise waiting for you!

* More on the history of the tram and what the team involved in restoring the tram have discovered can be found in the comments section of the original news story – http://www.britishtramsonline.co.uk/news/?p=1571
(which is where much of the information provided on this page has come from)

Thanks to Stephen Cobb for information contained within this story 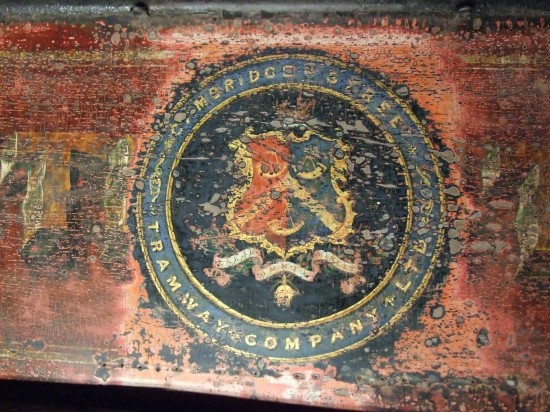 6 Responses to Update on Cambridge Horse Car 7 – it’s from Bradford!