Posted on Saturday 28 July 2018 by Gareth Prior

Back to Devon for this instalment of Picture in Time as we take a look at the Seaton Tramway with a true original Devon tram the main feature.

This photo was taken in 2003 and shows a fairly busy scene at Seaton terminus as 19 departs with a full load of passengers and the destination blind showing Depot which suggests this is a gala event including behind the scenes depot tours. 19 is one of three trams at Seaton which have been converted from original first generation trams, this one being an Exeter car and dating from 1906 (and being withdrawn from its original life in 1931). Numbered 19 – and then 21 in the Exeter fleet – after withdrawal it was sold on for further use until discovered in 1984 before arriving at Seaton in 1994 where a start was made on converting it to operation. The tram was completed in 1998 becoming the third and final such tram conversion and it was finished in the Exeter Corporation Tramways livery.

Joining 19 in this photo are two works cars – 01 (which has had various uses over the years as seen in previous editions of Picture in Time) and 02 (the main works car in the fleet). 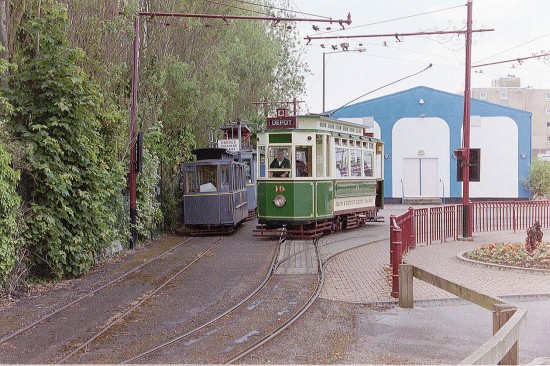