As we continue a look at trams from outside of the UK we go to the French city of Grenoble for a view of two trams in service.

Grenoble’s current tram system started operation in 1987 and was the second new French system (after Nantes) during the so-called French tramway renaissance. The network is now 22 miles (35 kilometres) long with five lines in operation; the latest of which opened in 2014.

In this photo we see two Alsthom TFS trams which were both part of a batch built in 1995/6 – the fourth and last series of this class for Grenoble with more recent trams being Alstom Citadis. 2046 – on the left – is working a line B service to Universities whilst we can also see 2050 which is on line A to Fontaine La Poya. The date is 22nd May 1999 and we are at the Gares (Station) stop. 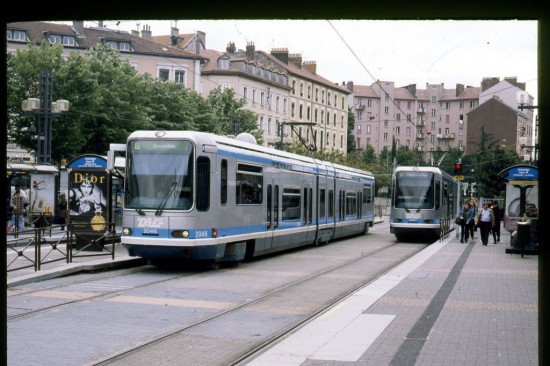