Posted on Saturday 10 November 2012 by Gareth Prior

The first of two bridges to be installed over motorways in Greater Manchester for the Metrolink extension to the Airport has been put into place and the work was done so quickly the motorway was able to be opened eight hours early. This bridge was installed over the M60 during a planned closure overnight on 3rd/4th November.

Cllr Andrew Fender, Chair of the TfGM Committee, said: “I’d like to congratulate all those
involved in this impressive construction feat, particularly the contractor MPT, for getting the work done so quickly and smoothly. An enormous amount of planning clearly went into ensuring this superstructure could be installed with the least amount of inconvenience to road users – both in the design of the bridge and the execution of the road closures. That planning has paid off and a major step forward taken in bringing tram services to Wythenshawe and the Airport. I’d like to thank drivers for their patience and understanding during the road closures, which caused heavier traffic than normal around the Princess Parkway area. This short term inconvenience will be far outweighed by the
benefits of the new Metrolink line, which I’m sure will take many car journeys off the road in the long term.”

The second motorway bridge will be installed over the M56 overnight on Saturday 24th/ Sunday 25th November. 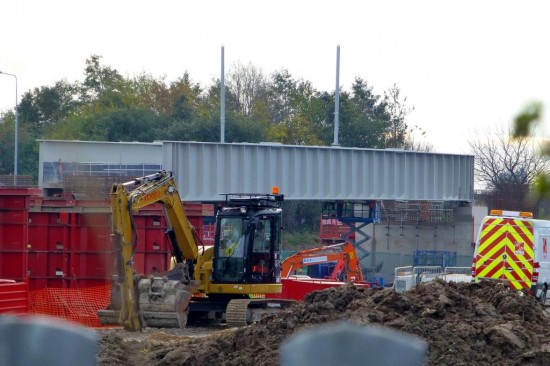 By 1100 on Sunday 4th November the bridge had already been put into place over the motorway as shown from this view. (Photo: Steve Hyde) 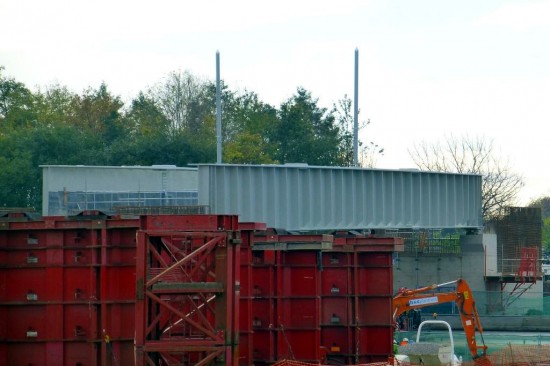 Another view of the bridge over the M60 which will eventually carry the Metrolink extension to Manchester Airport. (Photo: Steve Hyde)