In Pictures: A busy day in the Crich workshop

The past week has been a good one for fans of large open top trams around the UK. Fresh from the return to service of Blackpool 31 at Beamish Museum, and the announcement of Blackpool’s own ‘Princess Alice’ 706 being earmarked for overhaul with funding from a Fylde Tramway Society appeal, Saturday 30th June saw Newcastle 102 moved into the workshop at Crich Tramway Village for work to start on a major overhaul for this popular tramcar.

102 has not operated since suffering a broken axle back in 2000, but is now being returned to running order with thanks to the generosity of the Tramcar Sponsorship Organisation, whose small but dedicated membership have received the huge £125,000 which is required to restore the car to a working condition. The work will include rebuilding the bogies with two brand new axles, motor overhauls, completely rebuilding the north platform which sustained accident damage some years ago, re-sealing of all windows, a complete re-wire and full repaint. Indeed, work actually started a few weeks ago, when some parts of the lifeguards were taken into the workshop for initial assessment. The real visible progress began on 30th June, when the tram was lifted off its bogies which were rolled out to be stripped for refurbishment. The car body was then lowered onto a set of accomodation trucks, so that it can be moved around easily if needed. Although the overhaul of 102 is expected to take up to three years, the car will be a very welcome addition to the running fleet at Crich and it is excellent to see progress being made towards its long overdue return to use.

Also in the workshop, the long-term restoration project of London County Council 1 continues, and it would be fair to say that the tram is now looking absolutely stunning! Its own bogies are now completed and are waiting to be fitted. Also present, Sheffield 510 should soon be back in service following the fitting of a replacement dash panel and repairs to other damage sustained last summer.

Two other cars which have recently been seen in the workshop are Sheffield 74, which was returned to service earlier this year only to be withdrawn again temporarily due to a cracked motor suspension spring, but should be quickly repaired and returned to service, and Oporto 273 which awaits the fitting of a replacement axle and has not operated so far this year. It has recently been extracted from the depots so that its defective axle can be removed, so that its wheels can be pressed off and fitted to the new axle. So there is certainly plenty happening at Crich and as usual, the workshop is the place where much of the excitement is going on! 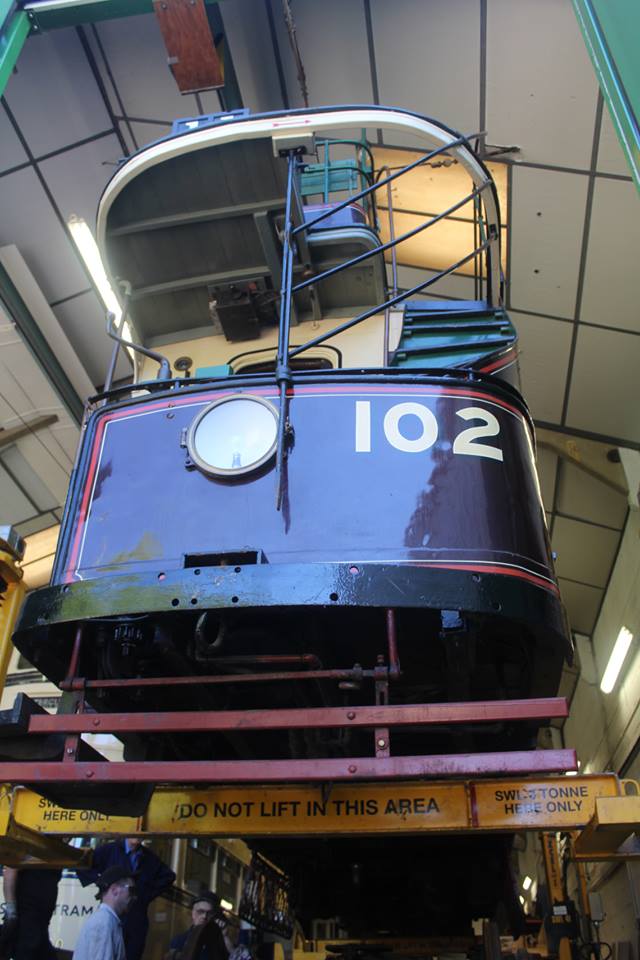 Going up! Newcastle 102 is seen being lifted off its bogies on 30th June, marking the start of its TSO-funded major overhaul. 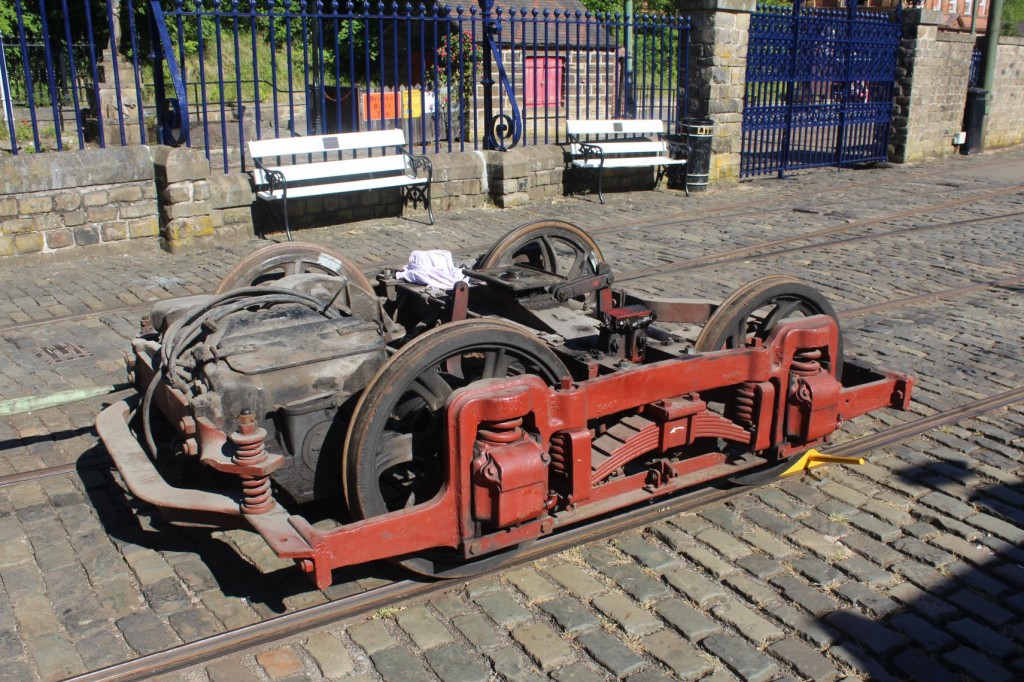 One of Newcastle 102's bogies is seen in the sunshine as it is moved across the depot yard. 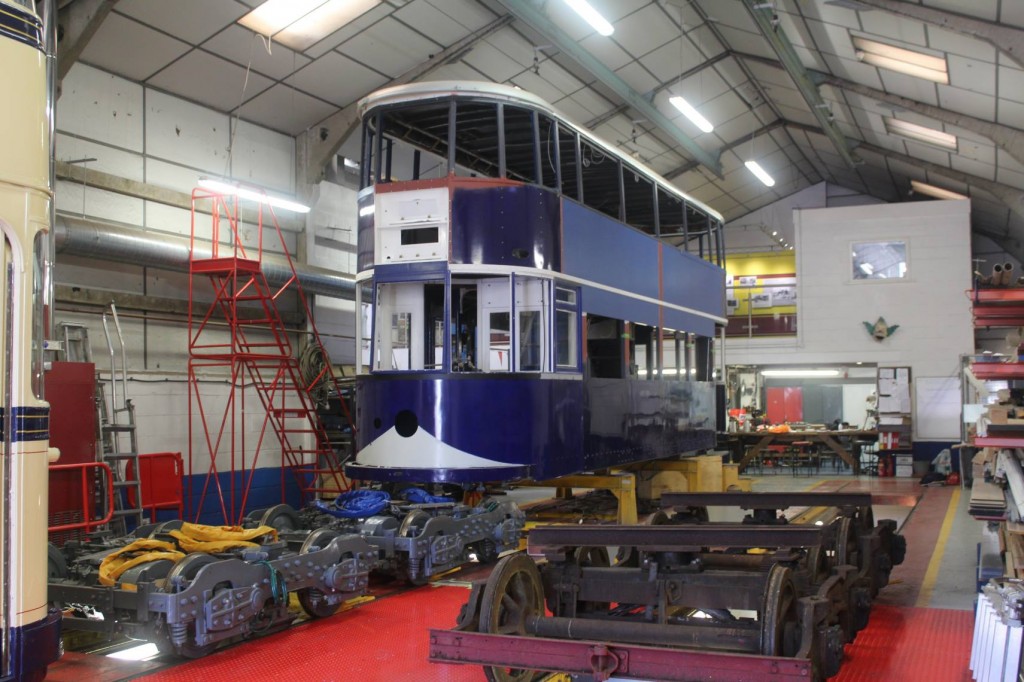 What a beauty! LCC 1 sits in the workshop behind its refurbished bogies, showing the latest progress on this outstanding restoration job. 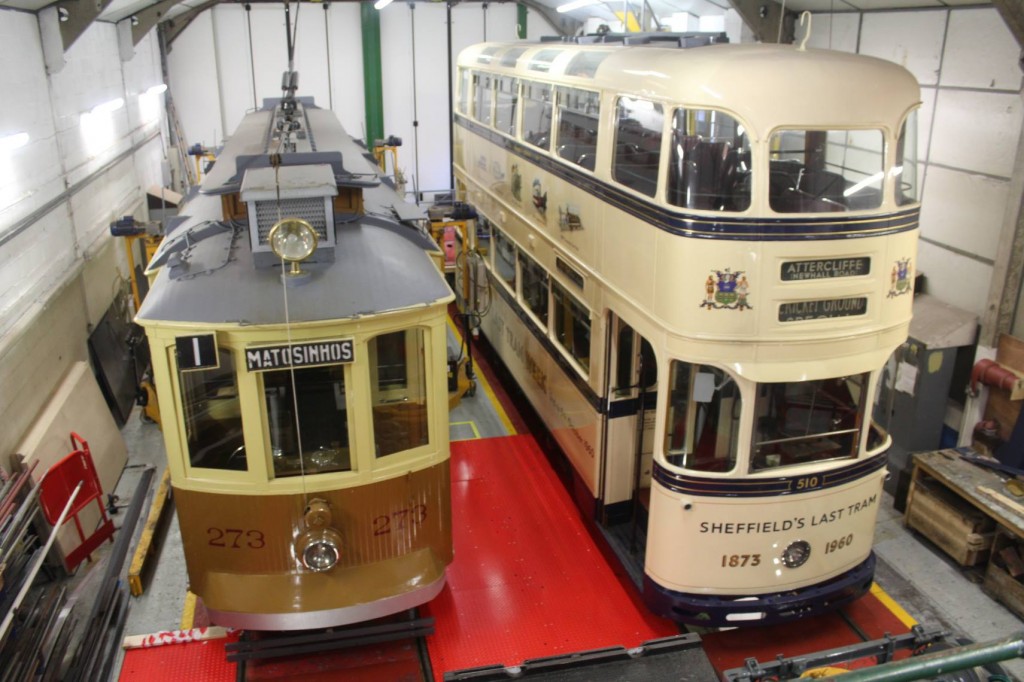 Seen from 102's top deck, Oporto 273 and Sheffield 510 are both in the works being prepared for a return to service after an absence due to various faults. (All photos by Peter Whiteley)

2 Responses to In Pictures: A busy day in the Crich workshop