Posted on Saturday 30 June 2018 by Gareth Prior

Today we feature one of the very first photos I ever took of a tram back in 1992 – little did I know at the time that this would be the only photo I ever took of an OMO in normal passenger service!

The tram in question is OMO 5 which is seen having just departed from the stop at Cavendish Road and is now on the approach to Bispham on a summer’s day in August 1992. The tram is running through to Cleveleys and is not running one man operated as the conductor can be seen standing alongside the driver at the front. 5 was in the pretty standard green and cream livery at this point.

Originally built as English Electric Railcoach 221 and renumbered 609 in 1968 the tram was converted into an OMO, entering service in this guise in 1972. It was to last a little over 20 years in service before becoming the penultimate of the class to be withdrawn (beaten by a month and a day by 11) in February 1993. Remaining stored at Rigby Road until 2000 it was saved for the national collection and departed at the start of the June for the Clay Cross store – and that is where it can still be found 18 years later. 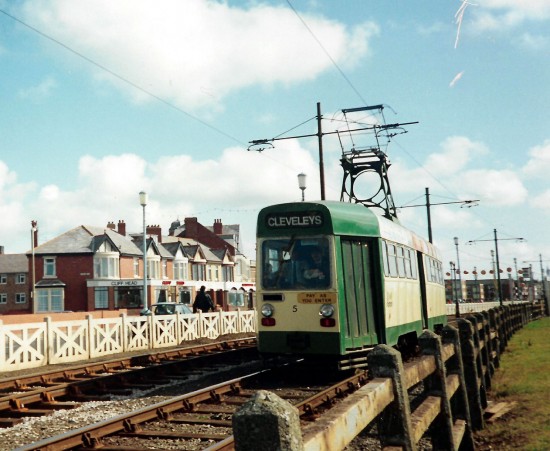