Posted on Saturday 9 June 2018 by Gareth Prior

We feature another tram which is now part of the Fleetwood Heritage Leisure Trust collection in this edition of Picture in Time – Balloon 710.

Built as an open top Luxury Dreadnought by English Electric, and originally numbered 247, the tram entered service in October 1934 and remained an open topper until October 1941 when it became fully enclosed along with the rest of its sisters (the third to be so converted). Before the end of the 1950s it had lost its double destination indicators and probably its biggest “claim to fame” is that it was the tram that was involved in one of Coronation Street’s big storylines when Alan Bradley was killed as it ran across the tram tracks outside the Strand Hotel. Withdrawn from service at the end of the 2007 season 710 was acquired on behalf of the Fleetwood Heritage Leisure Trust and can now be found in store at Wyre Dock awaiting further developments with ambitious plans for a major new attraction in Fleetwood.

This photo was taken in August 1996 and shows 710 carrying an approximation of the original Green and Cream livery which had by this time received the addition of T side adverts for Wall’s Ice Cream. The location is of course North Pier. 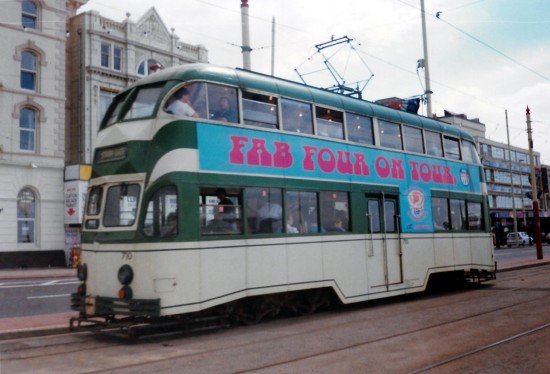