Posted on Sunday 21 October 2012 by Gareth Prior

As we reported last week test running on both the South and East Manchester line’s has recently commenced and this has continued over the past seven days. In addition the Oldham and Rochdale line beyond Oldham Mumps has seen some tram action and further wiring has commenced between Droylsden and Ashton-under-Lyne.

On the night of Thursday 18th October the first gauging run up to Shaw was undertaken.

Daytime testing as far as East Didsbury has started with a number of gauging runs undertaken.

Meanwhile the withdrawals of the initial batch of T68s has stalled in recent weeks with no
further examples being taken out of service for a few weeks now. Currently 10 have been withdrawn with another two expected to be removed from service soon (TfGM’s latest plan had been to take them out of service by the end of September although this has obviously passed now). Of note is that 3020 is expected to receive the Lancashire Fusilier name off 1020 in the next few weeks (1020 is the last unmodified T68 to be in service). 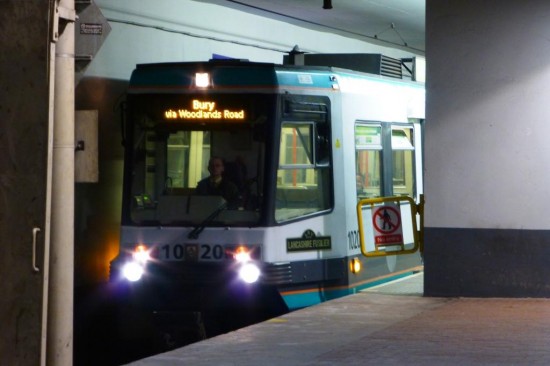 Still clinging on in service is the last of the unrefurbished T68s, 1020. Having lost its regular partner (1019) a couple of weeks ago 1020 can now be seen running alone, normally on the Bury-Piccadilly service but its days in service are expected to be numbered so catch it whilst you can! This view shows 1020 at Piccadilly. (Photo: Steve Hyde)