Posted on Friday 1 December 2017 by Gareth Prior

Ever since British Trams Online started we have only shown trams either operated or built within the British Isles but as part of our 15th anniversary celebrations we are trying something a bit different as we take a look at trams from around the world in this new pictorial series. Currently this will only be during December 2017 but if you want to see more of this please let us know and we will see if the series continues into 2018. For the first edition of this series we head to Hong Kong for an image of two of their iconic double deck trams.

Taken on 6th November 2017 we see two double deckers in this image which was taken through the open window on the top deck of another tram. On the right 76 is approaching the camera on its way to Western Market whilst we also see 150 moving away from the camera. Showing that all over adverts aren’t only seen in the British Isles both trams are carrying different ads. Both of these trams are part of a batch of post-war cars which were rebuilt between 1987 and 1992. 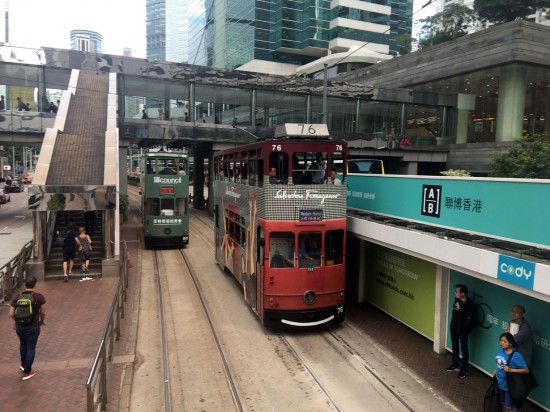