Posted on Thursday 28 September 2017 by Gareth Prior

Another look inside Rigby Road Depot for this instalment of Picture in Time with two trams the focus of our attention.

The year is 1998 and two trams of interest and standing at the front of the depot – Coronation 660 and Illuminated Frigate 736. At this time 660 was the only Coronation Car at Rigby Road and was a firmly established member of the operating fleet seeing use on specials at various times during the main season. It was also still carrying the full beading on its mainly cream livery. Alongside is the original Illuminated Frigate, 736. Still in its first life as an illuminated feature car 736 still had another three seasons of use in this condition before withdrawal and then rebuilding. Also just visible in this photo is the Trampower consortium test tram with the Western Train and Rocket also seen behind the Frigate at the back of the depot. 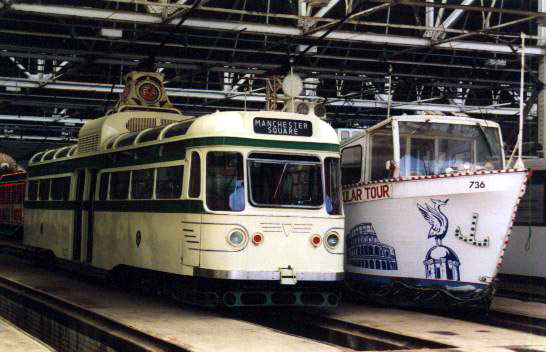