Posted on Wednesday 27 September 2017 by Gareth Prior

Having quickly established itself as one of the premier tram events in the British Isles the Blackpool Tramway Anniversary Spectacular took place over the weekend of 23rd and 24th September (plus an afternoon of Brush Car action during the previous afternoon as already reported on). With 2017 seeing the 80th anniversary of the Brush Railcoaches they understandably took centre stage during the weekend including two loanee trams and one returning to service for first time since 2004. The following review looks at the first day of the event – Saturday 23rd September.

Of course attention throughout the weekend was on the Brush Cars and this day was no different with three Brush Cars plus one former Brush Car in passenger service throughout the day. 621 – its first full day in service since its major overhaul was completed – was joined by visiting pair 623 (from Heaton Park) and 630 (from Crich – itself also running its first day since returning “home”) and they were included in the general pool of nine trams which were used in service starting off from Pleasure Beach loop. They were joined by Bolton 66, Boat 600, Railcoach 680, Balloon Cars 713 and 715 and the Illuminated Trawler 737 (itself, of course, built using Brush 633). Balloon 717 had initially been sent from depot to the loop with the intention of it being used in service but the decision was soon taken to swap it with the Trawler.

As well as the timetabled services regular specials were dispatched from Pleasure Beach by the inspector on duty with most of the trams getting to stretch their legs although with the exception of its first trip of the day 600 was confined to the section to North Pier for obvious reasons.

In addition two trams were dedicated to full length journeys between Starr Gate and Fleetwood with Centenary Car 648 and Balloon 723 rolling back the years in providing this service. A twelfth tram was also out on the mainline with B fleet Balloon 700 being used for the hourly depot shuttle between Rigby Road and Starr Gate Depots.

Talking of Rigby Road Depot and as well as pre-booked depot tours being offered there were photographic opportunities on both Blundell Street and the depot fan. Blundell Street saw three trams unavailable for service with Balloon 701 and Centenary 642 (both trams which require workshop attention before they can return to service again) joined by recent returnee Centenary 645; the latter still carrying its graffiti livery applied during its time at the Windy Harbour Caravan Park.

The depot fan was the preserve of the Brush Railcoaches with four of the class stabled. As well as 631 (which wasn’t used in service during the day although it is part of the normal operating fleet) stored pair 632 and 634 were joined by the Fleetwood Heritage Leisure Trust’s 290 (or 627 if you prefer).

With 12 trams in action on the tramway and the weather remaining dry throughout the day this was another excellent day for Blackpool Heritage Tram Tours providing a little bit of something for everyone! 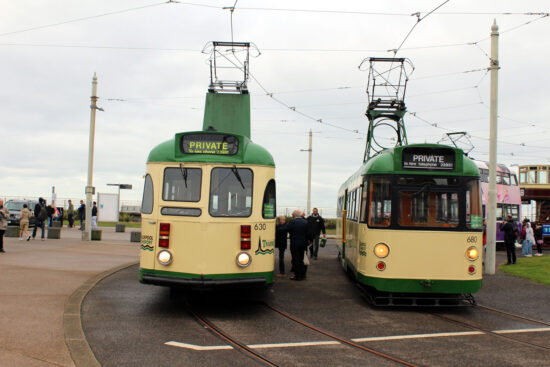 Brush 630 and Railcoach 680 stand on Pleasure Beach loop at the start of the day. 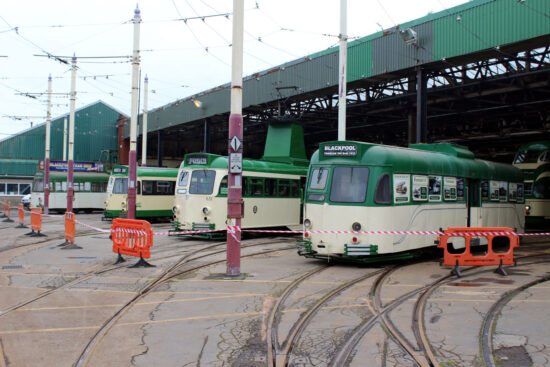 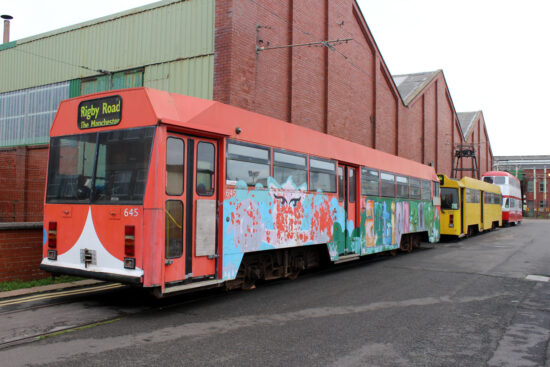 On Blundell Street Centenary Cars 645 and 642 are displayed along with Balloon 701. 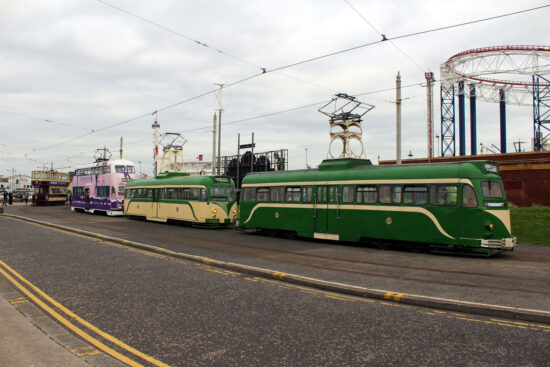 Pleasure Beach loop is the scene for this shot showing Brush Cars 623 and 621 in the foreground. They are joined by Balloon 713 and Bolton 66. 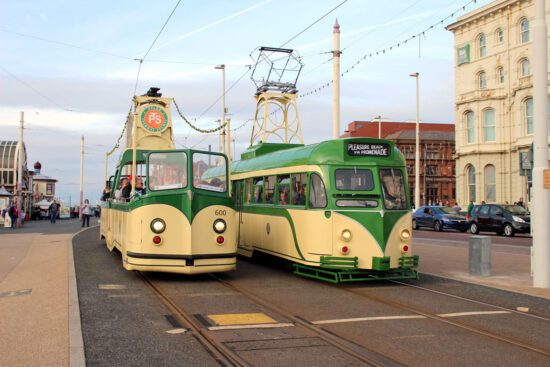 In a burst of late afternoon sunshine Brush 621 passes Boat 600 at North Pier. (All Photographs by Gareth Prior)