Posted on Saturday 23 September 2017 by Gareth Prior

Today Picture in Time heads to Croydon as we feature one of the many advertising liveries to have been carried on Tramlink since it opened to the public. This is 2533 in an ad for Nescafe.

2533 was the fourth Bombardier built CR4000 to arrive at Therapia Lane Depot when it was delivered on 16th November 1998 but it wasn’t actually the fourth into the UK as it had previously been at the NEC in Birmingham. It was spotted as part of a Bombardier Transportation stand at the conference centre at the start of the month beating 2531 and 2532 into the UK and thus becoming the second of a new generation of trams for London to make it into the country. Delivered in the then standard fleet livery of Red and White 2533 was one of several trams to receive vinyl wrap liveries ahead of the system opening with the Nescafe vinyls being applied in September 1999.

In this image we see 2533 at George Street with a service apparently running to Phipps Bridge. The date is 20th July 2000. 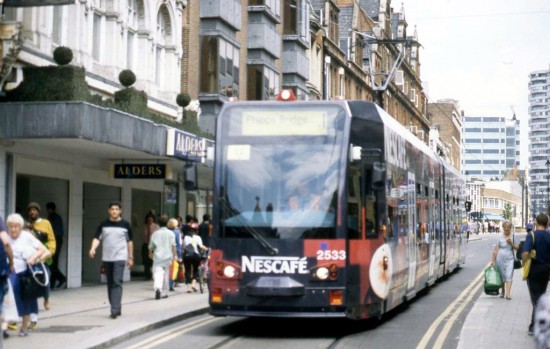