Posted on Thursday 21 September 2017 by Gareth Prior

Back to the Metro Coastlines years of the Blackpool Tramway today as we feature popular Twin set 672+682 at a time when they carried the garish Orange and Yellow Line 1 livery in 2005.

Originally entering service as Second Series English Electric Railcoach 272 in July 1935 the motor of this pair continued in service in the familiar streamlined style until being withdrawn from service at the end of October 1959 having been chosen for the Twin Car project, the fourth such tram to enter the workshops (after original pair 275 and 276 and then 277). Converted into a Twin Motor Car in Blackpool Corporation Transport’s own workshops 272 entered service in September 1960. As with all Twin Cars it was not initially permanently coupled although its matching trailer, T2, had entered service in August 1960. The pair finally got it together permanently in the last month of 1964 at which point 272 lost driving controls from its no. 2 end. Six years later and the trams were renumbered 672+682. Fast forwarding to the 21st century and they were selected for overhaul to aid Blackpool Transport to maintain a service through to Fleetwood with double deckers being banned from the northern section of tramway. Not only were they to receive an overhaul with modern features such as halogen headlights but they were also “treated” to a repaint into Metro Coastlines livery with the bright Line 1 livery of Orange and Yellow selected. 672+682 entered service in this condition at the start of the 2003 season. Remaining in service until the end of traditional tram operations in 2011 the trams were to become part of the heritage tram fleet and enjoyed a repaint into the original all cream livery along with a renumbering to 272+T2. Sadly suffering a fire in September 2016 272+T2 is currently out of service awaiting workshop attention.

In this first image we see 672+682 sitting on the centre track at Cabin on 6th September 2005 whilst working on specials. 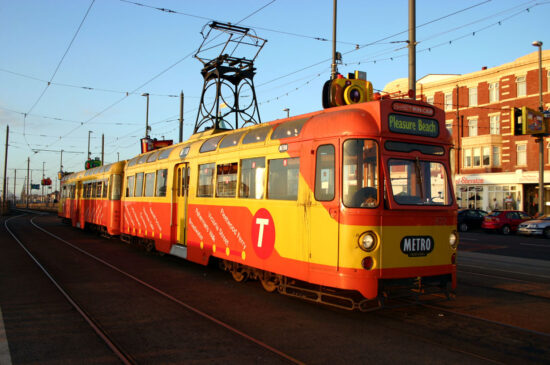 On the same day we see the trailer leading as they wait for departure from Fleetwood Ferry loading stop. 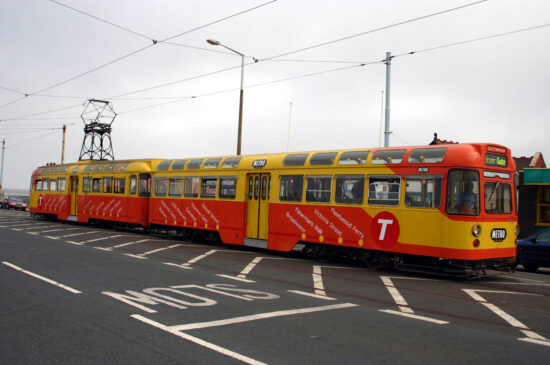