Posted on Tuesday 19 September 2017 by Gareth Prior

Today our archive photo series heads across to the Isle of Man for a view taken at the Strathallan terminus of the Douglas Bay Horse Tramway in August 1992 on a wet day which necessitated the use of an enclosed saloon.

A number of trams are visible in this image just as a horse (in the days before they were easily identifiable with names round their necks!) is being hitched to the front of enclosed saloon no. 1. The enclosed saloons are still a vital part of the operational fleet on the horse tramway today for those days when the weather is a tad inclement (which do apparently happen on the Isle of Man sometimes!). The chances are that if you go to Douglas on a wet day this year that 1 will there waiting to keep you dry for a trip along the Prom.

Amongst several other trams alongside 1 we see Bulkhead 34 with advertising for Golden Wonder crisps. At this time 34 was part of the regular operating fleet but in more recent years it had fallen out of use and was one of six trams made available for sale during 2016. At the auction 34 fetched £1300 and was removed from Strathallan Depot soon after for its new life, although details of where the tram can now be found have not been released.

The trams were photographed on 26th August 1992. 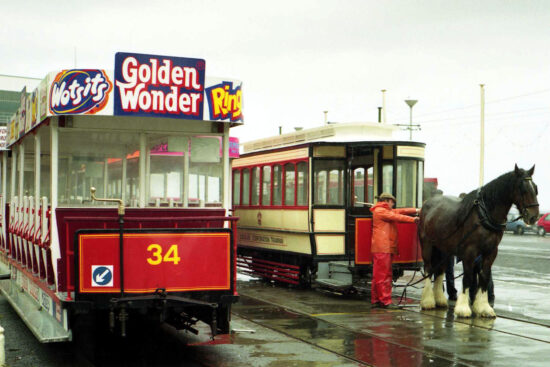