Posted on Thursday 17 August 2017 by Gareth Prior

In this edition of Picture in Time we are once again in Blackpool with the tram featured being one of the iconic Balloon cars – 702.

The third of the Balloon cars to arrive in Blackpool 239 – as it was originally numbered – entered service in September 1934 and at this time it was an open topper as were the first 13 of these English Electric built double deckers. With the start of World War Two all trams were fully enclosed and for 239 this happened in April 1942. As with all members of the Balloon Car fleet over the years the tram underwent a number of alterations and was renumbered 702 in the 1968 mass renumbering scheme. It continued to soldier on in service until it was withdrawn from service at the end of 2009, but not before it had become the last of the class to run on the traditional tramway all the way to Fleetwood Ferry. Acquired by the Manchester Transport Museum Society it left Blackpool in 2010 and after a period of display at the Museum of Museums and then storage at the East Lancashire Railway it arrived at its new home on the Heaton Park Tramway at the end of April 2014.

Both these photos date from 2005 and in this first view we see 702 in its heritage livery – plus heritage destination blinds – at Pleasure Beach on 4th September 2005. 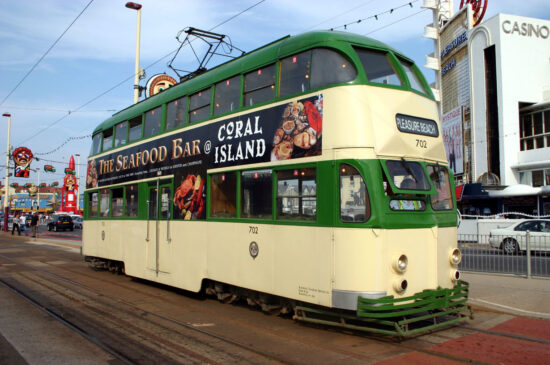 And then on 10th September we find 702 again, this time at North Pier and showing the opposite side with its different advert. 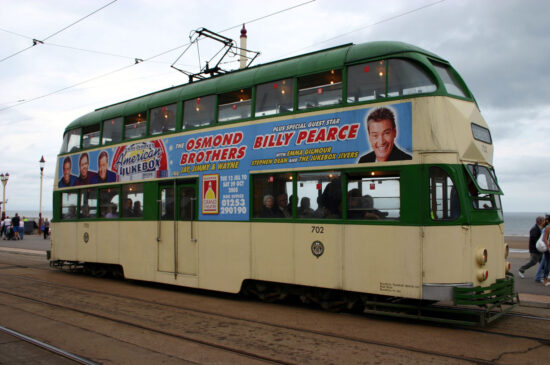