Posted on Tuesday 8 August 2017 by Gareth Prior

We are back over to the Isle of Man for this instalment of Picture in Time with a view of one of the Manx Electric Railway trailers, no. 42.

Trailer 42 was built by G F Milnes in 1903 and was of the fairly open trailer type enjoying a long period of operation save for some standard periods of maintenance. However this was to change at the start of 2009 when it was discovered that the trailer, which had been withdrawn at the end of the previous season for overhaul, had cracked axles and it was fully withdrawn from attention awaiting attention. To date it remains out of service still awaiting this work to be completed and is stored at Derby Castle car sheds.

This view takes us back to August 1963 and shows 42 at Ramsey. Despite what seems to be a fine sunny day a number of shutters are down on the trailer as it seems to be waiting for its motor to complete its run round move ahead of a return south to Derby Castle. 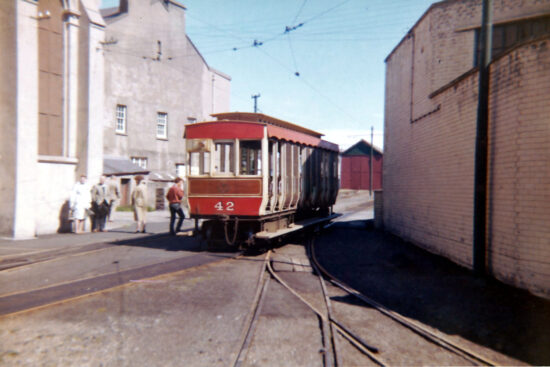