Posted on Sunday 6 August 2017 by Gareth Prior

A few years ago the Manx Heritage Transport Festival seemed to pass the Douglas Bay Horse Tramway by with just a normal service running with normal trams. But now with Isle of Man Transport in charge of the horse trams as well it has been brought into the mix much more and the 2017 event was no different.

The event started on Wednesday 27th July and saw the Douglas Bay Horse Tramway run an evening service up until 2100. The evening also saw an open evening at the Stables (where the Trammers can still be found throughout the season despite the fact it was up for sale at the end of 2016 and plans have been on the table for a temporary structure alongside the Derby Castle terminus). 140 people enjoyed the guided tours of Summerhill Stables showing their popularity.

Earlier in the day double decker no. 18 was in use again with two horses hauling it along the Prom. This was originally due to take place at 0900 but due to heavy rain was postponed until 1430. It would have been easy to just cancel this run so full credit for waiting for the weather to clear.

Then on Sunday 30th July a special timetable was in use which saw some of the rarer trams in service. This include saloon no. 1 – normally only seen in poor weather but on this day enjoying some runs in better conditions – and probably the highlight Toastrack no. 42. This is thought to be 42’s first use of 2017 and its use seems to have been a catalyst as it has been used on further trips over the past week. 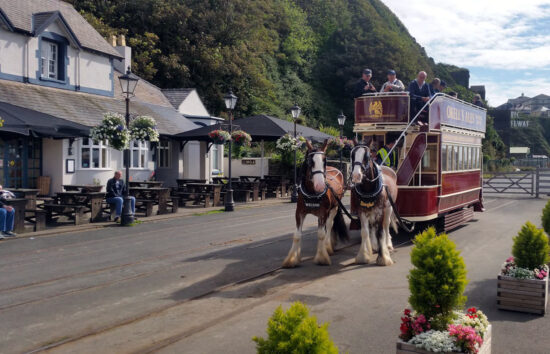 William and Douglas prepare to depart from Derby Castle with no. 18. (Photograph courtesy of Friends of Douglas Bay Horse Tramway)