Posted on Tuesday 1 August 2017 by Gareth Prior

In this edition of Picture in Time we are back at the Crich Tramway Village for a view of Oporto 273 shortly after arriving at the museum before it underwent its extensive restoration.

Oporto 273 arrived at Crich in June 1995 having been withdrawn from service in its home country. The tram was built in 1928 and enjoyed the best part of 70 years in service before it was acquired by the Tramway Museum Society in order to showcase a semi convertible car (with its windows opening into the roof for those warm Portuguese days – not quite so often seen in the Derbyshire countryside!). When arriving at Crich the tram was in an advertising livery but it was not the intention for it to retain that livery (the advent of advertising liveries running permanently at Crich was to follow a few years later with Blackpool Jubilee 762) as it was to be restored to original condition in the standard ochre Oporto livery. It entered the workshops in 1998 and a full restoration was completed allowing the tram to enter service in 2001. Since that entry into service the tram has spent some time out of use including a period following an aborted loan to Blackpool in 2010 but it is now a regular member of the operational fleet.

This photo shows 273 outside the workshops in June 1995 sporting its all over advert for a bank. In the background The Red Lion can be seen under construction. 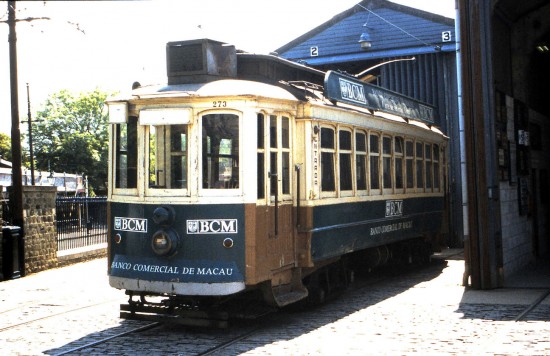 1 Response to Picture in Time: Oporto 273