This edition of Picture in Time is in the East Midlands as we feature Nottingham Express Transit with Incentro 205 the tram in the picture.

As with all of the Incentro trams 205 was built by Bombardier at their Derby works – the only class of modern trams for the UK built within the UK with Bombardier now concentrating their tram construction on mainland Europe – and after completion the tram made the short journey from Derby to the new state of the art depot at Wilkinson Street. Going through the usual commissioning process 205 was ready to enter service as NET opened in March 2004 and has remained in use ever since carrying the name Lord Byron.

In this view we see 205 arriving at The Forest with a service from Station Street to Phoenix Park. 205 is still in the original dark green, black and silver livery with roof adverts. The date is 29th August 2007. 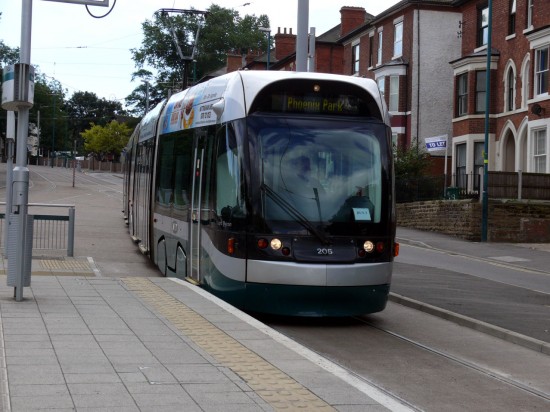