Posted on Tuesday 4 July 2017 by Gareth Prior

We head to Crich for this edition of Picture in Time for an early image of Blackpool Standard 40.

Blackpool Standard 40 was built by Blackpool Corporation Transport in 1926 and remained in service in various guises until withdrawal came in 1962. It was saved for preservation and departed Blackpool in October 1963 when it made the journey to its new home at Crich. First running in 1964 40 has proved to be one of the most popular trams to operate particularly in the past 30 years often coming in towards the top of the mileage charts. It has also managed to squeeze in a trip home for the 1985 Centenary but a hoped for trip to the Lancashire coast in 2010 had to be cancelled.

This photo dates from October 1964 and shows Blackpool Standard 40 at the undeveloped museum with the familiar sight of Crich Stand in the distance. It appears that in this view 40 is being used for some overhead works as there is a tower wagon coupled to the front of the tram whilst on left we see several other engineering vehicles including the Crane. At this time 40 was still in the more modern green and cream livery rather than the now familiar red, white and teak colour scheme. 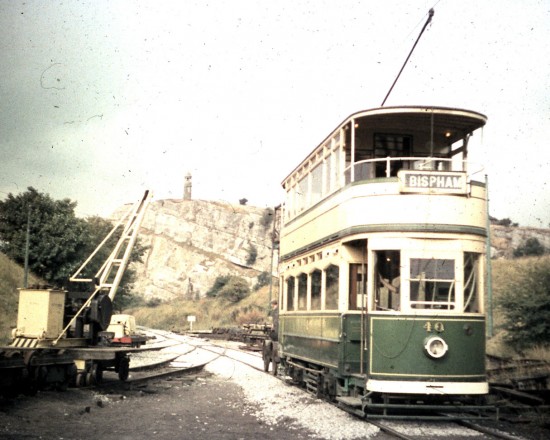