Posted on Saturday 17 June 2017 by Gareth Prior

In this instalment of Picture in Time we are back in London for another image from the Docklands Light Railway, this time coming from 2005.

Over the years a number of the units on the Docklands Light Railway have carried advertising liveries – although in recent years an uniform look has been the preferred images for the DLR – and one such unit to receive vinyls was B90 22. The first of the B90 units, 22 was built by BN Construction in Brugge, Belgium in 1991 and if you take the number as evidence it was first built of this class it is now the oldest vehicle to be operating on the DLR. In this image it is carrying an advertising livery for Serco who at the time the photo was taken on 16th March 2005 were the operators of the Docklands Light Railway. It seems that the front door may have been replaced following the application of the advert as although it carries the correct colours it is missing the erc from Serco! The unit is leading class B92 58 on a service to Lewisham which would have originated at Bank. The station the pair are calling at is Westferry. 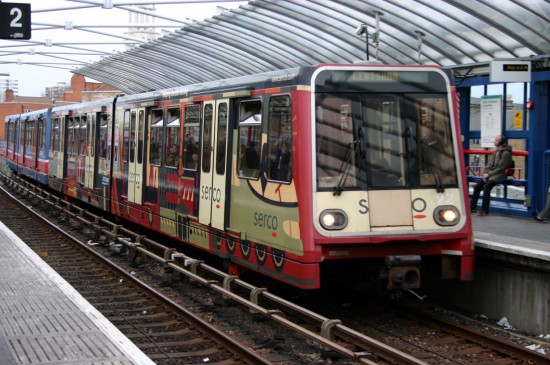