Picture in Time: Blackpool Balloons 706 and 709

We are off to Blackpool again for this edition of Picture in Time and this instalment finds us in 2005 for a view of two trams now very different but once identical.

If you took a look at this image without much knowledge of the Blackpool Tramway you would be hard pressed to know that these two trams actually started off life at the English Electric Works in Preston both as open top double deckers officially known as the Luxury Dreadnoughts. Carrying their original numbers of 243 and 246 they entered service in Blackpool within a week of each of other in September/October 1934 and remained in their open top condition until the 1940s when – as with all their sisters – they were fully enclosed; for 246 this was in November 1941 whereas 243 retained its open top condition until January 1942. Renumbered in 1968 706 and 709 continued to be integral parts of the tram fleet until 1980 when 706 was involved in an accident at Pleasure Beach (with sister 705) which caused considerable damage and ended up with the tram being restored into open top condition in time for the 1985 Centenary celebrations – a condition it retains today although it is currently out of service requiring workshop attention. As for 709 this is one of four Balloons to have undergone major rebuilds which resulted in the new flat fronted look as seen here with the tram returning to service in this condition in April 2000. Although retained for the upgraded tramway with widened centre entrances the tram is currently out of service in the depot.

This photo was taken at Pleasure Beach and shows the two trams unloading at the southbound stop. 706 is in the attractive original green and cream fleet livery with wooden Princess Alice name board and original numbers above the centre entrance whilst 709 carries one of its adverts for Sealife. The date of the image is 4th September 2005. 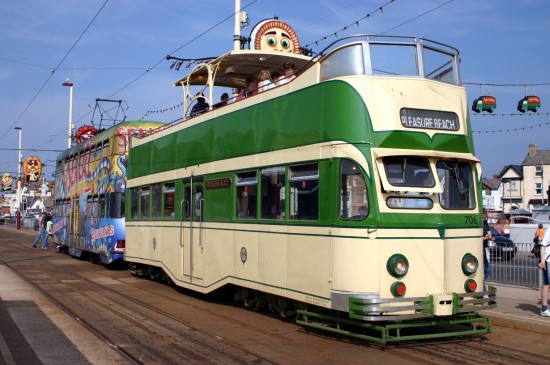