As the majority of our Picture in Time images are written in advance sometimes we land lucky with the tram featured as it has been in the news and that is exactly the situation this week (even if it has meant a bit of re-writing!) as we take a look at Blackpool Jubilee 761.

761 was unveiled from Blackpool’s very own workshops in 1979 having been converted from Balloon 725 (which had been withdrawn back in 1971) and was the first double deck one man operated tram. Featuring just one entrance/exit the tram proved to be slow to load and unload and when it came to a second conversion (762) a centre exit was provided. The tram remained in service in a variety of liveries until the end of traditional tram operation in 2011 after which it became part of the Fleetwood Heritage Leisure Trust collection. After a period of outside storage it was moved for secure undercover storage back home at Rigby Road Depot in December 2013 and that was where it remained in a state of limbo until last week. At that point – as we reported last week – its ownership was transferred to the Blackpool Heritage Trust giving it a more secure future with eventual plans to return the tram to tracks.

Photo number one shows 761 – along with a Twin Car – at the unloading stop at Bold Street, Fleetwood on 31st August 1993. Both trams have a uniform Green and Cream look. 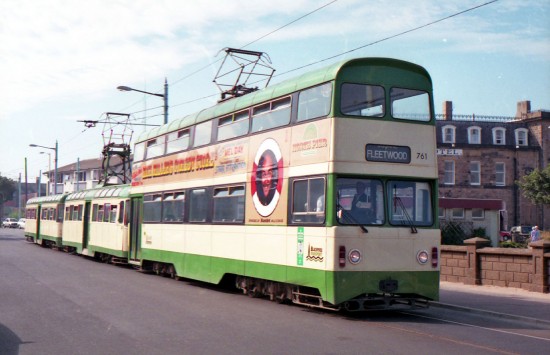 And then later on the same day this is 761 at Manchester Square – with Brush 621 for company – with a special to Cabin. 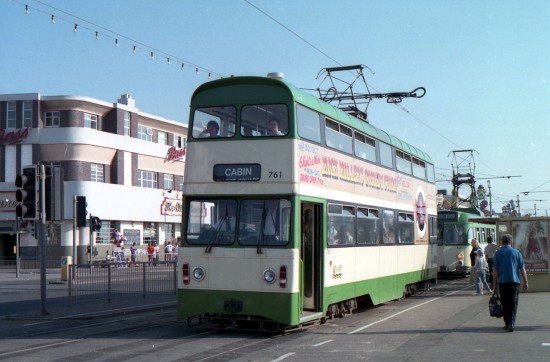