Posted on Tuesday 9 May 2017 by Gareth Prior

Today Picture in Time is in Crich for an early archive image of the National Tramway Museum with two trams in the shot.

The two trams shown here are Blackpool & Fleetwood Rack 2 and Grimsby & Immingham 20 and the date is 12th July 1964 – just seven days after the very first public electric tram services had run. 2 is heading past the Stone Workshop with it retaining destination boxes and headlamps at this stage whilst 20 seems to be stabled at this point in time. 20 is, of course, now better known as Gateshead 5 and 1964 was in fact the only season that the tram ran in this guise (it returned to service in 1966 but in the maroon colours of Gateshead instead of the BR green). Today both trams are now out of service awaiting their turn through the workshops. 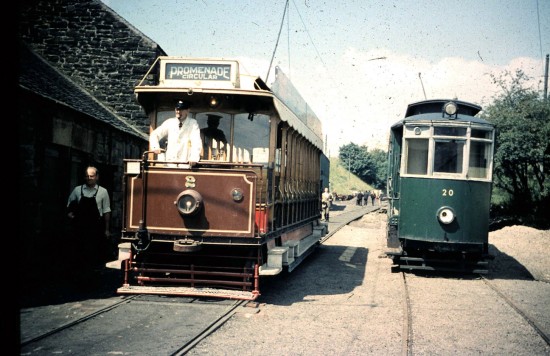 2 Responses to Picture in Time: Blackpool & Fleetwood 2 and Grimsby & Immingham 20