New exhibition at Crich for 2017

Posted on Tuesday 28 March 2017 by Gareth Prior

Arms to Armistice is a new exhibition at the Crich Tramway Village – the second in the series of exhibitions to examine how the outbreak of the First World War affected the tramways of Britain. This exhibition looks at the latter stages of the war from mid-1916 through to the Armistice in 1918 and reveals how the increased employment of women on the trams led to them taking on more responsibilities.

The exhibition looks at how as the women’s responsibilities increased, women employed by the tramways were motivated to ask for equal pay and working conditions and looks at the disputes and strikes that occurred as a result.

It also shows that the tramway industry as a whole didn’t necessarily advocate the long-term employment of women and how as soon as the war ended they were dismissed as quickly as they were recruited. Thousands of men who returned from war were reintegrated into their former roles on the tramways and the government encouraged the employment of ex-servicemen.

Nottingham is taken as a portrait of a typical city tramway and is used to highlight the effect of war on a tramway and it reveals the legacy left for Britain’s tramways.

The Memorial Wall recognises the sacrifice of those tramway employees who never returned from the war.

Laura Waters, Curator at Crich Tramway Village, said: “There are more than a thousand names on that wall, all of whom were listed on the roll of honours in the trade journals during the First World War and merely a fraction of those who lost their lives. I am really proud of everyone who has been involved over the last three years with research and development for our First World War activities and exhibitions at the museum. But for me that wall represents exactly why we chose to do the exhibitions and recruitment tram, it’s all about remembering and acknowledging the sacrifice and changes that occurred during that period”. 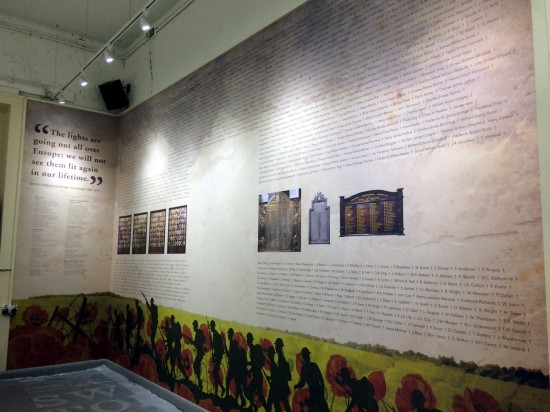 The completed memorial wall is seen in the exhibition. (Photograph courtesy of Crich Tramway Village)