Four wheels on my horse tram

Another hugely significant milestone in the restoration of Leeds 107, the last surviving horse tramcar from the Yorkshire city, occured on Wednesday 22nd August, when the body and truck of the tram were finally united. This followed on from the delivery of the body to a new temporary home at the Middleton Railway seven days earlier, where its reconstruction will be completed in more spacious surroundings than were previously available.

The events of August 22nd began early in the morning, when the completed truck of 107 was extracted from the small shed in Whitkirk where it had been assembled by members of the Leeds Transport Historical Society. This was carefully moved to the edge of a driveway using a short length of temporary track, and with one of the volunteers providing their car to anchor the tramcar truck! A crane lorry had been hired in for the day and was then used to transport the valuable load to Middleton where the car body was waiting for its arrival.

At Middleton, another, much larger crane owned by the railway museum was used to lift the body of Leeds 107 off the accomdation trolley it had been resting upon, and onto its own truck which was placed nearby to make the process as easy as possible. By the end of the afternoon, and in spite of a few obstacles, 107 had been safely mounted on its running gear. This enabled the horse tram to be moved on its wheels for the first time since 1901, as it was shunted into the nearby engine house. There it will remain on display for the next few weeks to those who are interested to see what has been acheived so far with this fantastic project. Work is then expected to continue through the winter, which will include fitting of many more parts which have been painstakingly restored independently from the rest of the tram. Most notably the open top deck will start to take shape, and hopefully, the completed tram will be available for display – and perhaps even operation – during 2013.

For more information on the LTHS’ efforts to restore Leeds 107, and to find out how to support their work, please visit: http://leedshorsecar107.squarespace.com/ 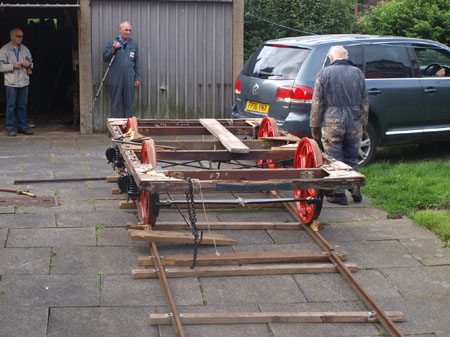 A clear view of the truck for Leeds 107, seen here being carefully moved out of the shed where it has been reassembled. (All photos courtesey of Jamie Guest/Leeds Transport Historical Society) 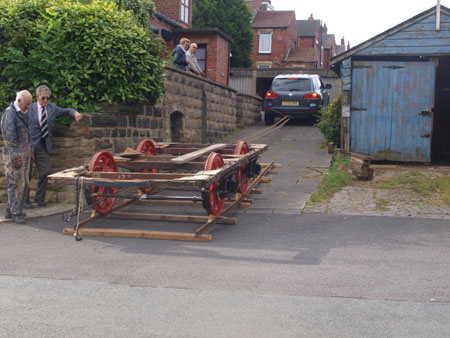 The horse car truck is seen being moved down the driveway with a volunteers' car acting as an anchor to ensure that it does not roll too far! 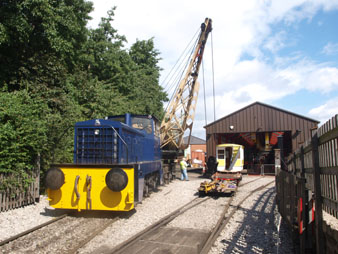 At the Middleton Railway, the lower deck of Leeds 107 is dwarfed by both a resident diesel locomotive and the massive crane used to transplant the car onto its new truck. 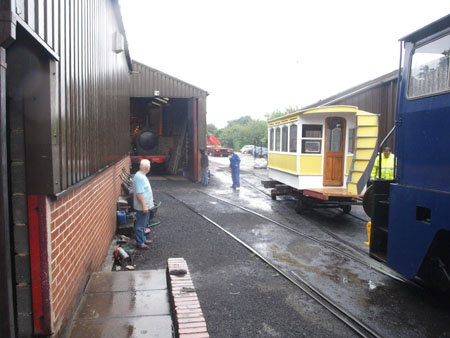 One last look at 107 mounted on its temporary truck in front of the engine house at Middleton.