As work continues on creating a modern light rail tram system in Edinburgh, less publicised work to restore the oldest surviving tramcar from the Scottish capital city has recently been completed. Edinburgh 23 was discovered in use as a garden shed around five years ago, and since then a small group of volunteers have been working hard to return it to its former glory.

As the horse car body had been shielded by a corrugated iron roof, it survived in remarkably good condition considering the many decades it has spent outside, making the task of returning it to its original condition easier than might be expected. However, this was still a painstaking task and it is nothing short of remarkable that it has been completely rebuilt within the space of just five years. Thanks to sponsorship from some companies and generous donations from the public, 23 has been restored to a very high standard and now appears as it did when new in 1880: as a typical open-top, double deck horse car with kniefboard bench seating on the top deck, and attractive period style advertisements on the decency panels. The tram is painted in a very stylish dark blue and white livery.

Last year, Edinburgh 23 moved from the bus garage where the bulk of its restoration had been carried out, to a new home in Fife at the Scottish Vintage Bus Museum, where it is now on static display looking superb. A dummy horse has been placed in front of the tram to create the effect that it is moving, but for now it is confined to this museum. However, the car has been restored to full running order and this gives the very exciting propsect of it visiting one or more of the UK’s museum tramways and being operated with appropriate motive power at some time in the future. Whilst it would be understandable if the car is to remain based in Scotland, it would undoubtedly be a great achievement if it could make guest appearances elsewhere. Another, even more exciting possibility, is that 23 could run again in its native city and it would certainly be a great achievement if it could appear alongside a second generation tram when the new Edinburgh system finally opens. It remains to be seen when, or if, these dreams will become reality but for now everyone who has played any role in the restoration deserves considerable praise and it is excellent to see an increase in the number of restored horse trams in the British Isles. 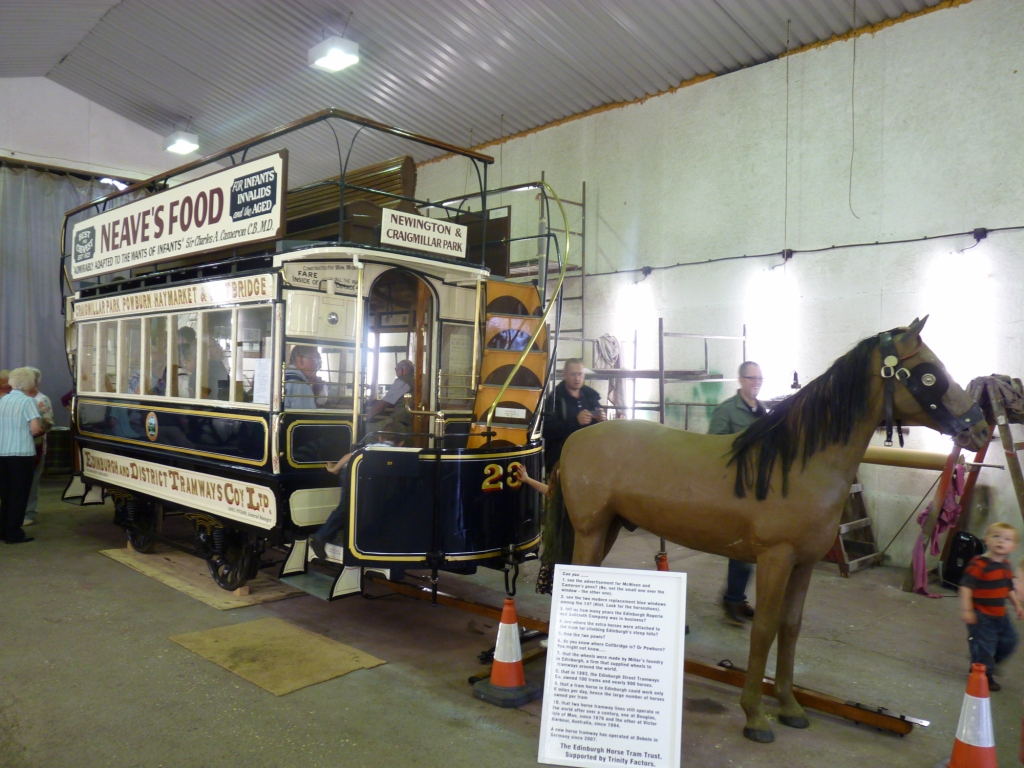 The magnificent Edinburgh 23 seen on display at its current location in Fife, complete with replica horse. (Photo by Gary Conn)