Posted on Tuesday 6 December 2016 by Gareth Prior

Today’s edition of Picture in Time is of a tramway/railway very rarely illustrated on these pages as we head to a resort on the northwest coast but instead of Blackpool we are a bit further down the coast at Southport for a view of the Pier Tramway/Railway in black and white.

There has been a tramway at various times on the Pier since 1863 (although sadly not now following the closure and removal of the latest tram in 2015) but the incarnation of the tramway we see in this photograph opened to the public in 1950. Replacing a previous line which had been in the centre of the Pier and used a 3’6” gauge this version of the tramway was at the side of the Pier and was built to a gauge of 1’11 ½”. Whereas previously it could have been considered a tramway the rebuild probably made it far more of a railway with the two new trains called the Silver Belle.

In this view we see the lengthy Silver Belle on Southport Pier on 24th April 1960. This was 10 years after it had reopened and 13 years before the Silver Belle was replaced by the Rose. 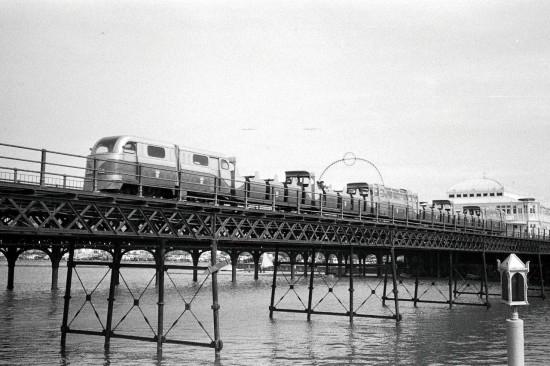