Posted on Wednesday 27 April 2016 by Gareth Prior

We have previously featured Beamish’s Sheffield 264 in the “Picture in Time” series when it was actually running as 264 but today we go back a bit further in time to see the tram when it was still under the identity of 342 and was in Gateshead colours.

As mentioned previously the tram was built as an open balcony tram and numbered 264 in 1907 and was then renumbered as 342 following conversion to a fully enclosed condition in the 1930s. Following withdrawal in 1956 it was transferred to the Clapham Transport Museum and was there until 1967 when it moved to the Consett Iron Company premises in Templetown. Here it was converted to open top condition due to the poor condition of the upper deck and painted in Gateshead colours. It was also renumbered 1 at this stage and it was in this style it arrived at Beamish in 1973. It was renumbered to 342 again at Beamish and operated in this format until 1985 when it was withdrawn for restoration.

We see the tram in the depot at Beamish on 12th August 1986 whilst it was awaiting restoration to 1920s condition as 264. Gateshead 10 provides company. 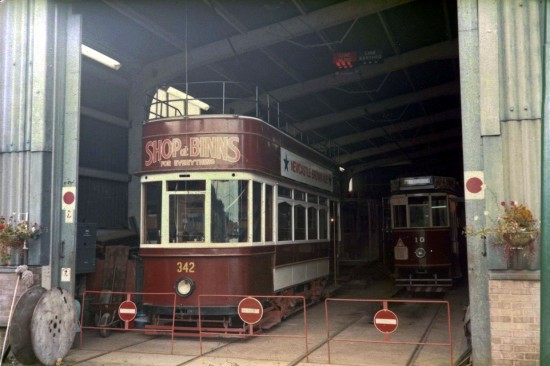 2 Responses to Picture in Time: Sheffield 342