Posted on Thursday 27 August 2015 by Gareth Prior

It’s time, once again, for our weekly round-up of when and where you can enjoy a ride on a traditional tram in the British Isles over the next seven days or so. As it is Bank Holiday weekend it means there is another enhanced period of Heritage Tram operation in Blackpool (the 4 tram green service on Saturday 29th and the 6 tram gold service on Sunday 30th & Monday 31st) whilst down at the Crich Tramway Village there is a Bank Holiday Fun Fair. Elsewhere around the country there will be plenty of traditional trams waiting for you to go for a ride…

Current Status: Operates every Wednesday to Sunday between 1300 and 1700 until the end of the summer school holidays (then Saturdays and Sundays only). Also operates on August bank holiday Monday.

Thursday 3rd to Sunday 6th September – Timetable D (services every 30 minutes between 1015 and 1545). Evening services run every Wednesday and Friday for summit diners. 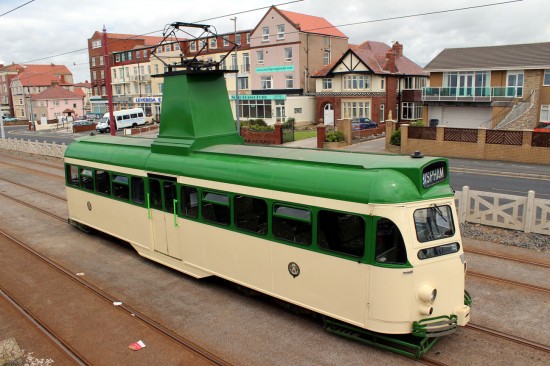 Blackpool Brush 631 is seen here at Bispham on 21st June 2015. This weekend is another weekend of enhanced heritage tram operation in Blackpool. (Photograph by Gareth Prior)