Two of the less-seen of Blackpool’s Balloon class in preservation, cars 702 and 721, have recently received a bit of TLC ahead of events this weekend being held by their respective owners, the Manchester Transport Museum Society and the North Eastern Electrical Traction Trust. Being in the best condition of the unrefurbished Balloons upon withdrawal, these two were always considered to be bargain buys and as such remain in good general condition despite both enduring periods of outside storage.

NEETT’s 721 has not made the news pages for a while as cosmetic restoration work had slowed down somewhat, with recent efforts being focussed more on repairing some panel damage on the illuminated Hovertram 735 and tidying up the interior of Twin set 674+684. That has changed recently though, with new roof dome framework being fitted to one end of 721 which will allow roof repairs to progress. It may be recalled that the roof of this tram was damaged during its road journey from Blackpool to storage in the North East, and this is the first major step in restoring it to the condition in which it left Blackpool. It is hoped that the car will be pulled out of the tram shed on Sunday 9th August and displayed on the depot forecourt, as one of the many attractions at the third annual ‘Tram & Transport Sunday’ at the North East Land, Sea & Air Museum. In addition tarmac is being laid between the rails inside the depot itself to allow visitors to walk safely inside and view the treasures within, allowing these trams to be better appreciated in their new home.

Meanwhile at Manchester’s Heaton Park, fellow ex-Blackpool resident Balloon 702 has benefitted from a thorough interior clean. Some of the spare parts which had been dumped in the lower deck have been relocated, some being placed more carefully in the top deck, and this allowed the bottom deck to be made much more presentable so that visitors to the Blackpool event being held in Manchester on 8th & 9th August can board the car and view its saloons. This will be a rare chance to see this Balloon car outside and it should attract plenty of attention as a welcome addition to the three Blackpool trams due to be in service at the park on both days. 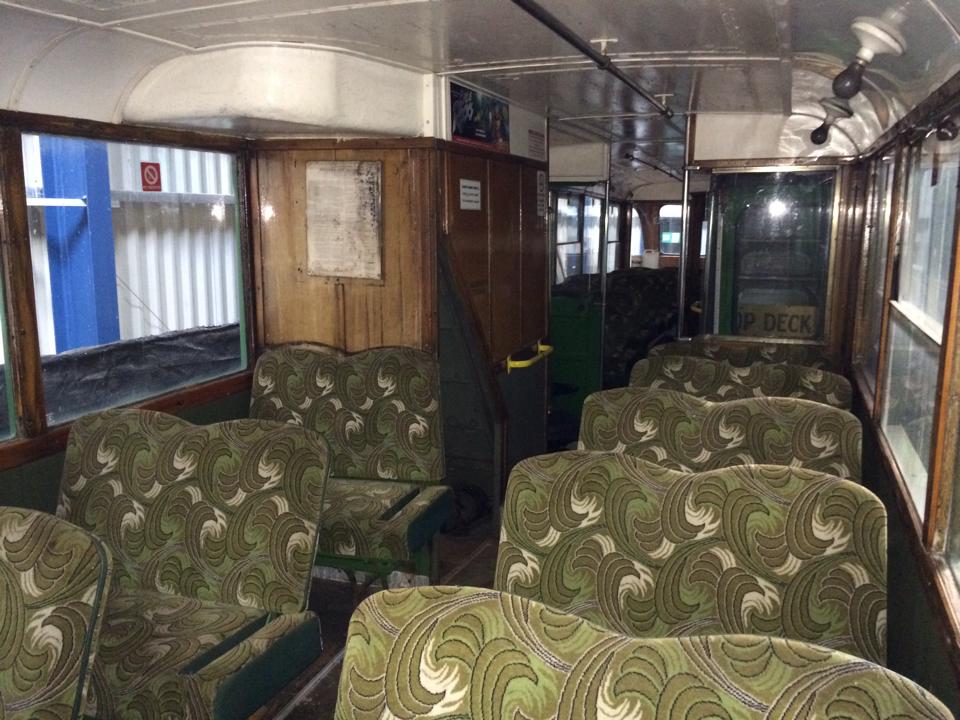 The classic interior of Blackpool 702's lower deck has stood up very well to open storage, as seen in this view of the car inside Lakeside Depot at Heaton Park whilst being prepared for its role in the tramway's upcoming Blackpool event. (Photo by Shaun Whitehead)