We head back to Croydon Tramlink for our latest Picture in Time image today. This time we go to last of the original CR4000 trams – 2553 – for a view at Arena at the very beginning of the lines operating life.

This view was taken on opening day 23rd May 2000 and shows Bombardier Flexity CR4000 tram 2553 stopping at Arena on a service to Beckenham Junction. Route 2 is the only one to survive today in its original form. Arena is on the former SER line from Addiscombe to Elmers End which was largely taken over by Tramlink having been closed in 1997. However, there was never a station at Arena, the line to Elmers End carries straight on but 2553 will turn sharply left  on a new line through South Norwood Country Park to reach the Crystal Palace to Beckenham Junction railway line near Birkbeck. 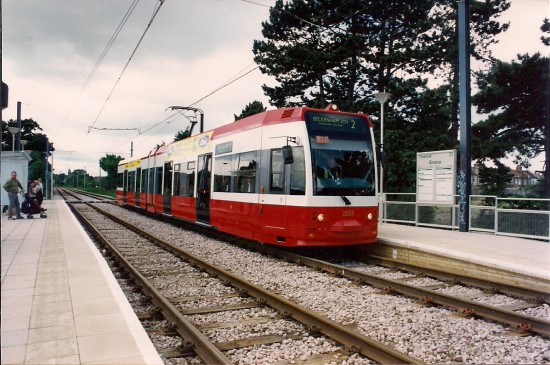