Posted on Saturday 16 June 2012 by Gareth Prior

Last week on British Trams Online we reported that subject to the successful completion
of testing services on the new Manchester Metrolink line to Oldham would start on Wednesday 13th June and that is exactly what happened when at 0524 on that date the first tram departed Manchester Victoria for the temporary stop at Oldham Mumps. In doing so it became the first tram in the town (in service anyway) since the original system closed on 3rd August 1946.

The original 25 mile Oldham Corporation Tramways system had operated between December 1900 and August 1946 before the decision was taken to close it (the final closure had actually been delayed by the Second World War) with the last tram in operation being number 4. Thus it was rather appropriate that the first tram to reach the town in the new era was M5000 3004 which formed the 0524 to Oldham Mumps and then the return 0600 to St Werburgh’s Road.

Nine trams are required to operate the service between Oldham Mumps and St Werburgh’s Road of which three are taken from the allocation based at Trafford depot with the remainder from Queen’s Road depot. On the first day of service this included the aforementioned 3004 plus 3011, 3023, 3025 and newly introduced to service 3027. All services on this line are likely to be covered by the M5000s.

The opening of this line has been much delayed with originally the section as far as Central Park due to open last spring being followed by the line as far as Oldham Mumps in Autumn 2011. Unfortunately delays with the full introduction of ATS meant this timetable was not possible and it is only now that trams can run through to Oldham Mumps. Three further extensions/route changes are planned for this line with services through to Rochdale Railway Station due to start later this year and then in 2014 the route will be altered via Oldham Town Centre (with the current Oldham Mumps station and route closing) and at the Rochdale end it will extend to the Town Centre from the Station.

British Trams Online will be adding a gallery of images from the opening day of the Oldham Mumps line in the next few weeks. We already have several photos to include in this but if you would like to add further images please email us at gareth.bto@hotmail.co.uk. 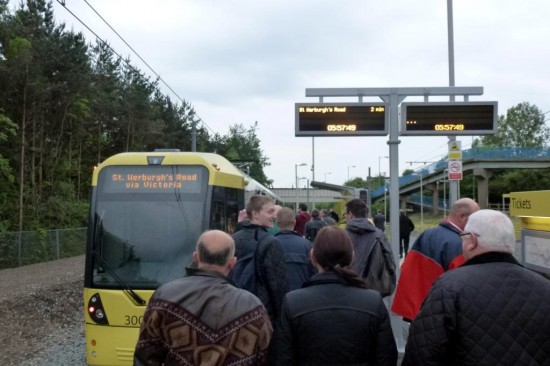 A busy scene at Oldham Mumps as passengers prepare to board the first tram departure from the town since 1946! (Photo: Steve Hyde) 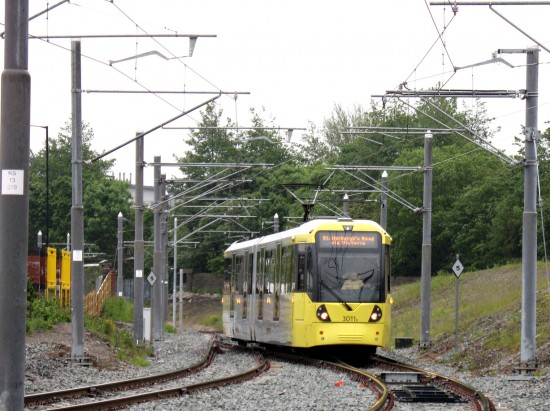 Later on in the day but also at Oldham Mumps we see 3011 preparing to return towards Manchester city centre and ultimately St Werburgh's Road. (Photo: Mervyn Williams)