Posted on Thursday 18 June 2015 by Gareth Prior

So what is there on offer for you in the world of heritage tram running in the British Isles over the next week or so? Well the highlight looks set to be another intensive weekend of Heritage Tram Tours in Blackpool with the Green timetable (four trams mainly between Pleasure Beach and Little Bispham with one journey to Fleetwood) running on Saturday 20th June and the Gold timetable (six trams in use with some trips to Starr Gate including some full length Starr Gate-Fleetwood journeys) in operation on Sunday 21st June. Elsewhere it is pretty much business as usual although don’t forget just because there isn’t a special event going it doesn’t mean there isn’t a good reason to go for a ride at any tramway in the British Isles!

Sunday 21st June – Gold timetable (6+ trams in service). This will include the only opportunity this year to ride on the heritage fleet to Starr Gate in passenger service.

Please note at the time of writing full details have not yet been released regarding the Green and Gold timetables over the weekend of 20th/21st June. As soon as details are announced they will be reported on our news pages along with the Blackpool Heritage Tours Facebook page (details below).

Current Status: Open every Saturday & Sunday. Trams run between 1200 and 1600. (Please check before travelling as the tramway was closed last weekend for the completion of electrical works) 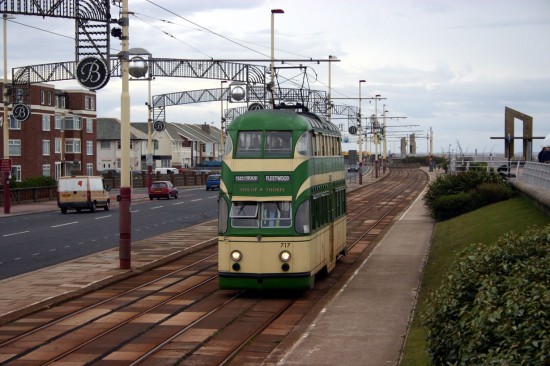 Sunday 21st June will be a rare chance to enjoy the site of heritage trams on New South Promenade between Pleasure Beach and Starr Gate so what better excuse than to head back to 6th September 2009 for a view of Balloon 717 on this stretch of track shortly before it was closed for upgrade. This photo was taken at Harrow Place with the tram running all the way to Fleetwood Ferry. (Photograph by Gareth Prior)