Today “Picture in Time” is back in Manchester and the featured subject is T68 1005 which was caught on camera ahead of opening in February 1992.

1005 was delivered to Manchester on 4th December 1991 and became the very first LRV to operate a powered trip through the city centre shortly before Christmas 1991. Then on 22nd January 1992 it was coupled to 1001 and was used to test the multiple working of the T68s through the city centre. Following further testing and commissioning 1005 entered service on the first day of public services on 6th April 1992. It became one of three T68s to be chosen to receive modifications to enable their use on the Eccles line with this work completed by the end of October 1999. Following this is settled into regular operation and the whole Metrolink network and apart from a visit to Wolverton works for refurbishment in 2006 didn’t have too many more claims to fame. On 22nd June 2012 it was the fourth of the class to be withdrawn from service and finally left Manchester when it went for scrapping on 25th June 2014.

This view of the vehicle shows it at Victoria during the testing period on 25th February 1992. 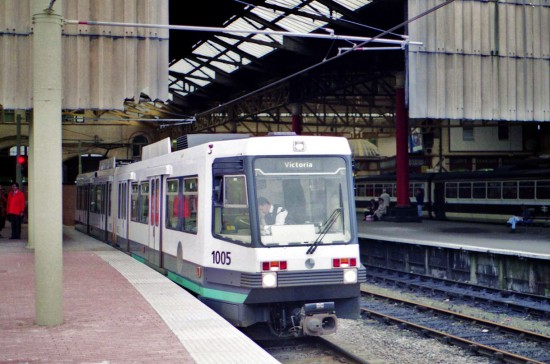