It’s off to Blackpool again for the latest instalment in our “Picture in Time” series. This time we go back to 16th August 1981 and catch up with a member of the popular Boat cars – 604.

Originally entering service in August 1934 Open Boat Car 230 was once one of a 12 strong class of trams which over the years has gradually been whittled down until today when there are just three of the fleet left in Blackpool. Renumbered as 604 in 1968 the tram had received windscreens in the 1950s and at the time of these photos it was carrying a rather plain green and cream livery. It continued to carry green and cream until December 1989 when it was to receive a radical new look with a red and white livery. It carried these colours until 1999 when a return to green and cream followed. Remaining as part of the heritage fleet upon the upgrading of the tramway 604 was repainted into the 1970s green and cream livery as seen in these photos, returned to its original number of 230 and also received the name George Formby.

In the first photo we see 604 on the centre track at Tower on 16th August 1981 waiting time to return with a special to Pleasure Beach. 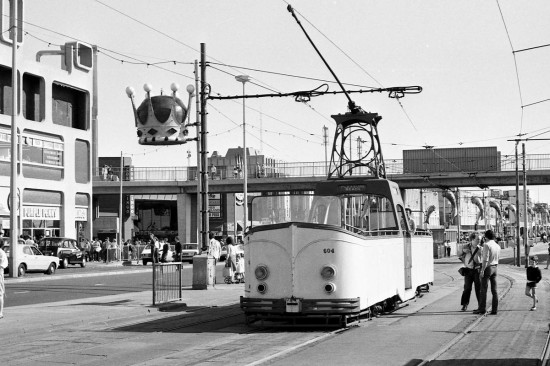 And then later on the same day we catch up with 604 on Pleasure Beach loop with Balloon 724 for company. 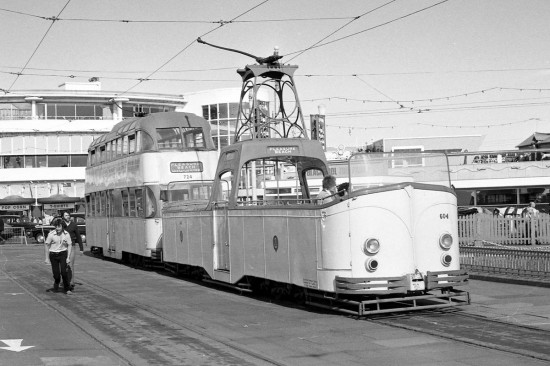 (Both Photographs taken by Ralph Oakes-Garnett)

This article has been edited since originally published. Thanks to those who sent corrections in.