Today “Picture in Time” heads back to Crich and we feature a tram which is currently withdrawn from service. That tram is Gateshead 5.

Gateshead 5 was constructed in 1927 and like many other trams across the UK this was within the workshops of its operating tramway, in this case it was in the Sunderland Road workshops. No. 5 is a large single deck tramcar and was built this way because of several low bridges on their routes and the need to offer higher capacity. The Gateshead system closed in 1951 but this was not the end for 5 as it was sold on to the Grimsby & Immingham Railway where it was renumbered 20. Running here until 1961 the tram was transferred to Crich in 1963 and first ran between 1968 and 1970. It then spent a number of years out of service before returning to the operational fleet in 1977. Another withdrawal followed in 1982 and then a brief period of operation happened in 1987. Workshop attention in 1988 and 1989 should have seen the tram run at the Gateshead Garden Festival but unfortunately it was not possible to 5 run here but it did managed to operate at Crich from 1989 to 1992. The tram then ran at Crich from 1996 to 1999 and 2001 to 2007. It has now been withdrawn once again and can be found in the main depots.

This photo shows Gateshead 5 in the depot yard on 19th August 1990. 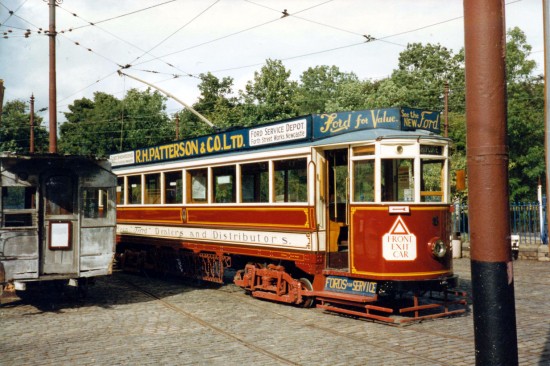 1 Response to Picture in Time: Gateshead 5